We’re halfway through CES but as we head for the weekend we wanted to know which new device caught your eye. Smartphone launches were fairly rare and some weren’t even proper launches - Xiaomi, for example, brought a white Mi Mix but still won’t sell it in the US.

Samsung’s Galaxy A (2017) lineup came out outside of CES, but it's still a very intriguing attempt at moving many premium features into the mid-range. The trio (A3, A5, A7) boasts an Always On Super AMOLED display, IP68 waterproofing, Samsung Pay and even 16MP selfie cameras (well, besides the A3). We already shared our first impressions of the Galaxy A5 (2017) and of the Galaxy A3 (2017).

Asus tried to jump ahead of the curve by offering not just VR (Google Daydream) but also Google’s AR system (Project Tango) with Asus Zenfone AR. A 5.7” QHD Super AMOLED and Snapdragon 821 handle the VR part, a 23MP camera with OIS and 3x optical zoom plus an array of depth sensors tackle the AR part. The company also followed up on its optical zoom phones with the Asus Zenfone 3 Zoom, which switched to a dual-camera setup that goes up to 2.3x magnification (down from 3x on the previous model). 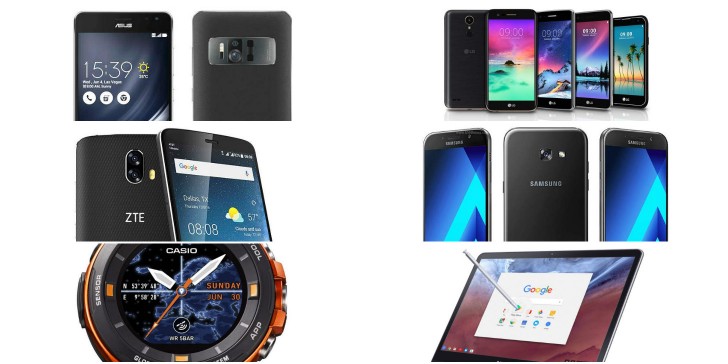 ZTE put battery life first with the Blade V8 Pro with an efficient 14nm chipset, while the base ZTE Blade V8 focuses more on price. Though the Pro model is hardly expensive at $230, you can read more about it here.

We saw some cool new smartwatches too - both the Casio Pro Trek F20 and the Misfit Vapor offer GPS tracking and 50m water resistance. The Casio is a $500 Android Wear watch, however, while the Misfit is only $200 but it runs proprietary software.

CES is traditionally a place for larger stuff - plenty of laptops like these from Samsung or from Asus, but going all the way up to smart fridges (laugh all you want, Samsung thinks a fridge can be the brains of your smart home).

So fridges aside, which gadget from the first few days of CES 2017 got your heart rate up?

Weekly poll: are VR or AR headsets the next big thing in tech?

nothing new on mobile tech... i wont vote... boring years to come...