The Apple iPad Pro didn't have it easy all week, taking hits from the majority of our readers. It's been a while since a "Hot or not" poll of ours turned out not in favor.

The iPad Pro gathered a total of 37% of upvotes - less than 2 out of 5 people hit the thumbs up. Apparently, the productivity benefits of the large screen failed to entice most of you. There's also the matter of the Pencil that needs to be recharged every now and then, and the Smart Keyboard that can only stay in this one position.

And that's before getting to the less than affordable price tag, which certainly helped steer you to the downvote side. The additional $270 that the accessories will set you back aren't particularly hot either, even if their currently limited availability might lead you to believe otherwise.

In all fairness the 12.9-inch Apple tablet is not exactly a mainstream device, so a widespread appeal was never part of its game plan. And certainly 37% of people aren't designers and on-the-go video editors, so the iPad Pro still manages to speak outside of its target audience. 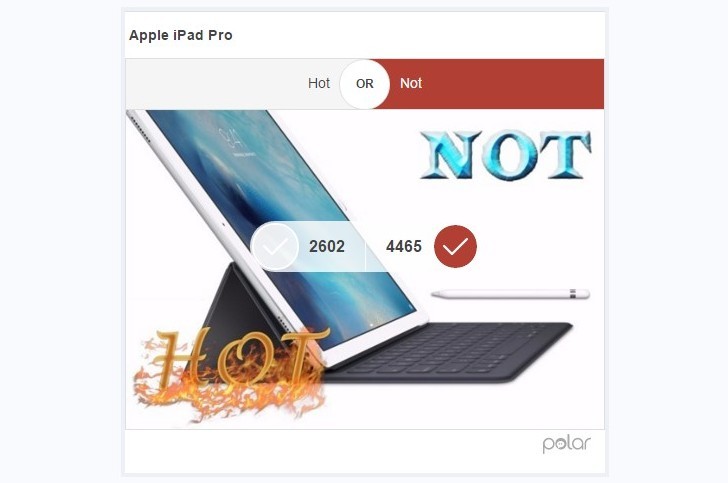 Touchwiz, uh. no. If u're talking about different Anroid OS flavors, better include Cyanogen. CMOD is lightyears ahead of TouchWiz. Touchwiz on OS 5.1 is great; but is still boring. You can be productive, unlike iJail, but Cyanogen still has ...

I think gsmarena bloggers should stop pretending to be surprised at apple products getting mostly downvotes here in Gsmarena every time there's a voting involving apple products. Even a samsung galaxy j phone will beat iphone 6s plus in gsmarena.

If that were the case, there wouldn't be any need for a comparison in first place. What's the point of a Laptopesque device that is just good for web browsing and media? Desktop apps you say? I care about them, and many others like me who use thei...