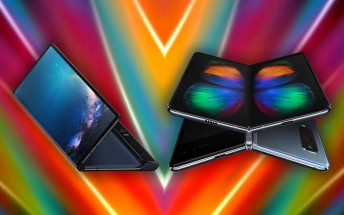 Foldable phones are the first new form factor to emerge in years and people – both consumers and the teams designing the phones alike – are still not sure what the best design is.

Over the week we had some back and forth between Samsung and Huawei execs, each claiming theirs is better and the other one has flaws. No clear winner emerged there and last week’s poll is too close for a definitive victory.

The fold in design of the Samsung Galaxy Fold won by 4 percentage points. Right now it seems that people’s main concern is durability and the usual safety blanket – the chemically-strengthened Gorilla Glass – is not yet available for foldable screens (though Corning has announced that it’s working on it).

The alternative – the vertical fold in of Motorola’s design – also garnered a good deal of attention, beating Xiaomi’s dual fold design. ZTE has an interesting patent on a similar vertical fold, so multiple companies might pursue this design. The perennially-neglected fans of small phones may have a reason to be happy in a year or two. 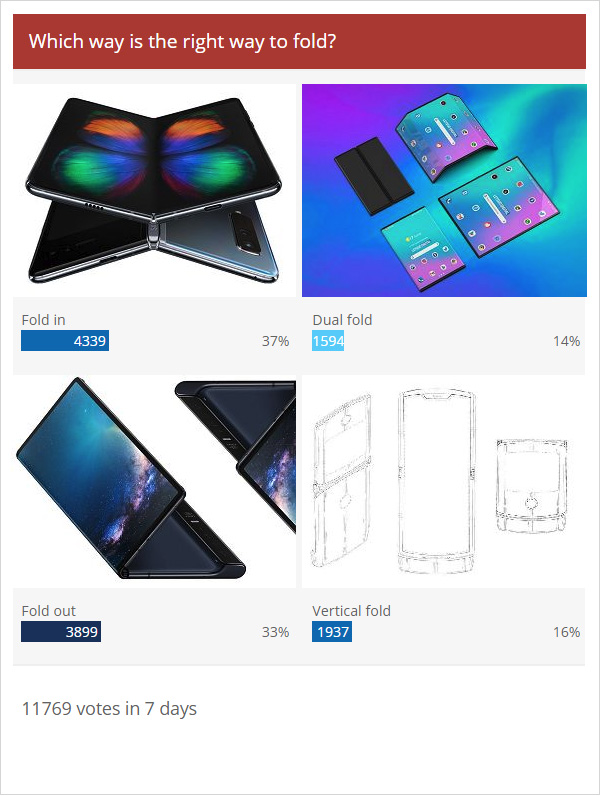 Voters often commented that the fold out Huawei Mate X looks cool, but the worry about practicality remain. And more concerns keep coming up. The obvious downside of this design is that it leaves the screen vulnerable to scratches. But even with a foldable Gorilla Glass, there’s another issue – uneven wear on the AMOLED panel.

The way the Mate X is set up, the “front” half will be the main screen. Unless you want to take a selfie (or make a video call), there’s no reason to use the smaller “rear” screen. That will put more hours of work on the “front” pixels and they will age faster.

We suspect that it will be a few years before we have our true answer. Consumers at large (and not just early adopters) need to use a foldable phone for a year before the major flaws of each design are revealed. Right now it’s mostly guesswork. Educated guesswork on the part of the engineers, but guesswork nonetheless.

Here's what the protective cases for Galaxy Fold will look like

Shatterproof reminds me of Motorola Z/Z2 Force, that should be alright.

I never use any kind of casing on my phone to this day, so I'm not too bothered about it.

Yes it is, most of samsung flagship phones have that quality feeling in ur hands, you can feel that you are holding a machine in ur hands there's not enough words to express the feeling, am sorry i got carried away lol, bro its ur decision either you...