HTC has rediscovered itself multiple times now, though never quite returning to its peak days. The HTC U11 could be the phone that turns it around – we liked it and you liked it too.

In fact, the vote in last week’s poll went 70/30 in favor of the new flagship – a merger of HTC 10’s perfectionism and U Ultra’s user focused customization.

As expected, the lack of a 3.5mm headphone jack proved to be a point of contention, but HTC does provide an adapter in the box. The Xiaomi Mi 6 got away with it and this adapter seems to have pleased most HTC fans.

HTC U11’s unique features – the liquid glass back and Edge Sense – didn’t come up often, instead the phone’s excellence in the camera department and audio performance were mentioned. No surprise, those are easily the best qualities of the U11.

There were some detractors, of course, and it doesn’t help that in the US the flagship is exclusive to Sprint. If nothing else, it should sell better than the 10 Bolt. 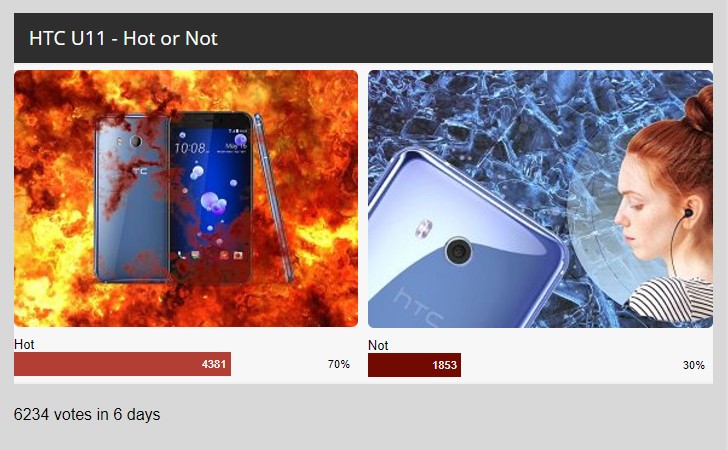 Weekly poll: will you be buying a Realme 7 5G during the Black Friday deals?

Weekly poll: will your next phone be small, medium or large?

+1 Just as I was sold on an idea of a metal clamshell U11, with a sole negative being a missing headphone jack, here comes an all-glass device and chalks a yet another '-' on the board.

Don't need the 3.5 jack don't know why so many moan about it they also give you really good earphones and an adapter