The rear camera setup on the Huawei P30 Pro takes the best photos of any mobile camera, whether it's shooting in the dark or faraway subjects. And it’s this superiority that led to a very positive vote in last week’s poll.

The triple camera is miles ahead of the competition in terms of telephoto camera and low-light photography, the ultra-wide camera is excellent as well (and it shoots great macros). Any one of these would have been impressive on its own, but to have all three on board means the P30 Pro is the unchallenged photography king.

As a flagship phone, however, it’s not quite perfect. For one, video recording is great, but not class-leading (quality is not perfect, no 4K at 60fps also hurts). Same for the selfie camera. But that’s not the issue that most commenters have with the phone.

It’s the price – some are used to having Huawei prices undercut Samsung and Apple. We could argue that having the best still camera makes it reasonable to match the Galaxy S10+ pricing.

Instead we’ll tell you to be patient. Huawei phones (like other Androids) start getting discounts pretty quickly and if you can wait a few months, you can easily get a more palatable price (the same is true for Samsung, there are some good deals on S10 phones already).

With the Pro covered, what happened to the vanilla Huawei P30? Well, nothing good. It comes down to price again, the vanilla model sacrifices too many features without offering enough of a discount to make it worth it. This model mostly flew under the radar in the poll, we’ll see if it performs better in stores. 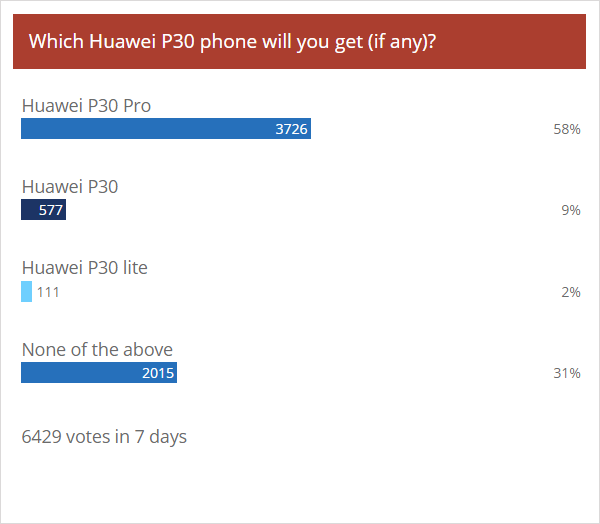 I'm a photographer, so yes - I DO understand what I'm talking about.

Its funny how people think that Huawei spys on its users yet Other manufactureres (Apple, Samsung, Oneplus etc. dont) LOL. Well with huawei P30 Pro atleast you get the most EPIC camera there is on a smartphone.