Weekly poll results: Moto G6 Plus is a star, the other budget models fail to impress

The Moto G6 Plus is the mid-range Motorola worth having, our poll reveals. With over half the votes, this €300 model completely dominated its siblings.

The difference between it and the non-Plus G6 include a drop to a 4-series Snapdragon chipset, which many deemed untenable. The reduction in screen diagonal – from 5.9” to 5.7” - proved less of an issue.

We were surprised that neither of the large battery models – the Moto G6 Play (4,000 mAh) and Moto E5 Plus (5,000 mAh) – proved particularly popular. The latter especially seems attractive, that’s a lot of battery life for €170.

But that’s not the biggest issue – a worrying 23% of voters picked “none of the above”. Sure, many came to Moto’s defense, often pointing out the pure Android, but now that similarly priced Nokia models are on the market, Motorola isn’t the only choice. 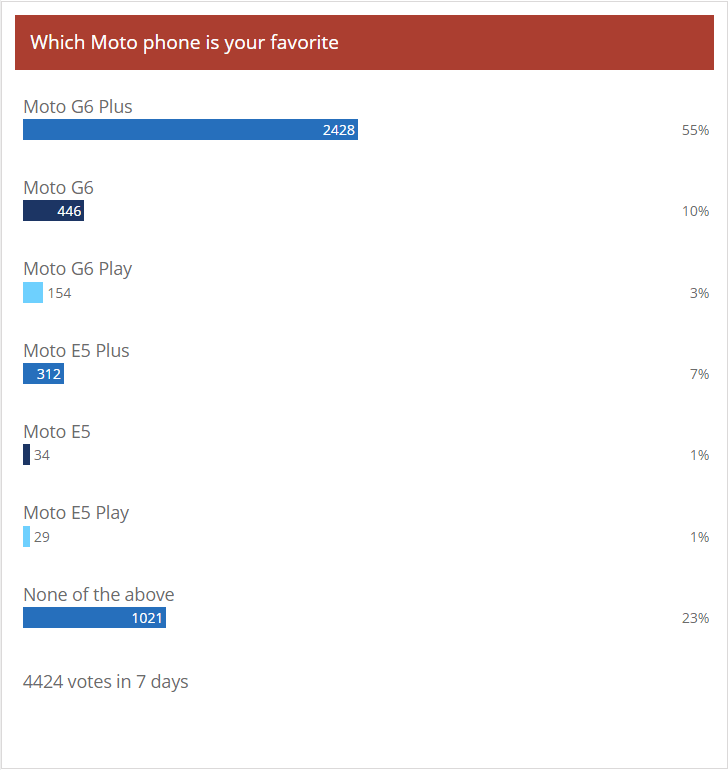 Why dont you ask GSMArena staff, how many Motorolas they use now as primary phone? Motorola is not bad, even now under Lenovo, but is just same in design like it was in 2013. They have even lower spec than HMD phones(7 Plus). If you wanna good pho...

Never buy Moto devices. Especially, G series. Look at the state of G5 series on update front. I own Moto G5 Plus. Security patches every 3-4 months, no signs of Oreo still, they are going to release Oreo version 8.0 and not even 8.1, only 1 major upg...