Weekly poll results: OnePlus 7T gets a warm welcome, but people are curious about the 7T Pro

The OnePlus 7T got a warm welcome in last week’s poll, but it seems that many will wait until the OnePlus 7T Pro is unveiled before making a final decision. While Pete Lau and Carl Pei were pretty active in tweeting details about the 7T before the launch event, the co-founders have been pretty quiet about the 7T Pro.

Anyway, there was an argument in the comments about microSD cards. OnePlus never offered expandable memory and that’s fine for many – especially now that internal storage uses UFS 3.0, which is significantly faster than even the top microSD cards. Others, however, still want the flexibility offered by a card slot, so they have a place to store their multimedia.

Other features that OnePlus has been avoiding came up too and this time people sounded more critical than usual – as the price of the phone keeps rising, there’s less and less excuse for the OnePlus 7T not to have waterproofing and wireless charging. 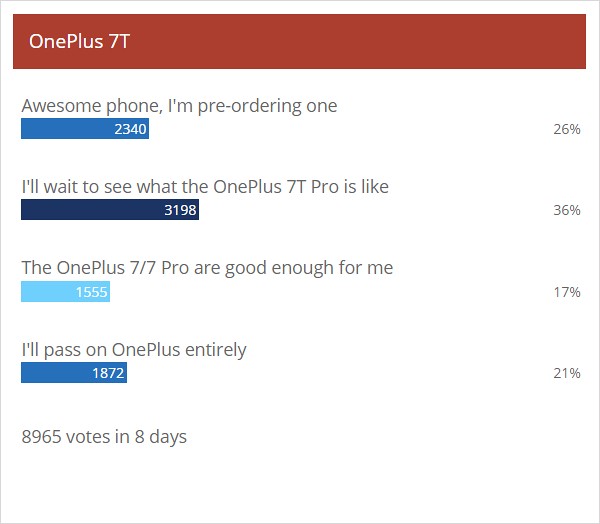 There will be an event in London next week (October 10) and the OnePlus 7T Pro – if it exists – should be unveiled then and there. That should help those who are still undecided to figure out if the 7T is the right phone for them.

Weekly poll: How good is the OnePlus 7T?

But the phone would be a success

Why bother buying sup par chinese brand when we have iPhone 11 versions?