Xiaomi did the right thing by expanding the availability of the Redmi Note 11 Pro+ 5G. The phone was previously available in China and in India (under the name Xiaomi 11i HyperCharge 5G), now the phone is reaching for a wider audience.

It will be a hit, judging by the numbers in last week’s poll. It received nearly two thirds of all votes and most of the positive votes. Let’s just say that the other two Redmis didn’t fare as well.

Xiaomi includes the powerful 120W charger in the retail package, the phone has a microSD slot and a 3.5 mm headphone jack. It’s a crowd-pleaser amidst phones that omit such things. The 120 Hz 6.67” Super AMOLED display also helps, as does the 108 MP main camera. Not everyone in the comments was a fan of the Dimensity 920 chipset, but it doesn’t seem like a deal-breaker either.

At a staring price of $370, the Redmi Note 11 Pro+ 5G is competitively priced and is a one to keep an eye on if you’re in the market for a mid-ranger.

The Note 11S 5G is a rebranded Poco M4 Pro 5G and when we asked about that one, our readers made it clear that the price will make or break the phone. $250 is too much, apparently, so Xiaomi needs to go back to the drawing board.

Finally, the Redmi 10 5G found itself at the bottom of the poll. This $200 phone might find some success among undiscerning buyers who just want a 5G phone on the cheap. It’s not hard to find a phone that will make you happier with just a little research, though. 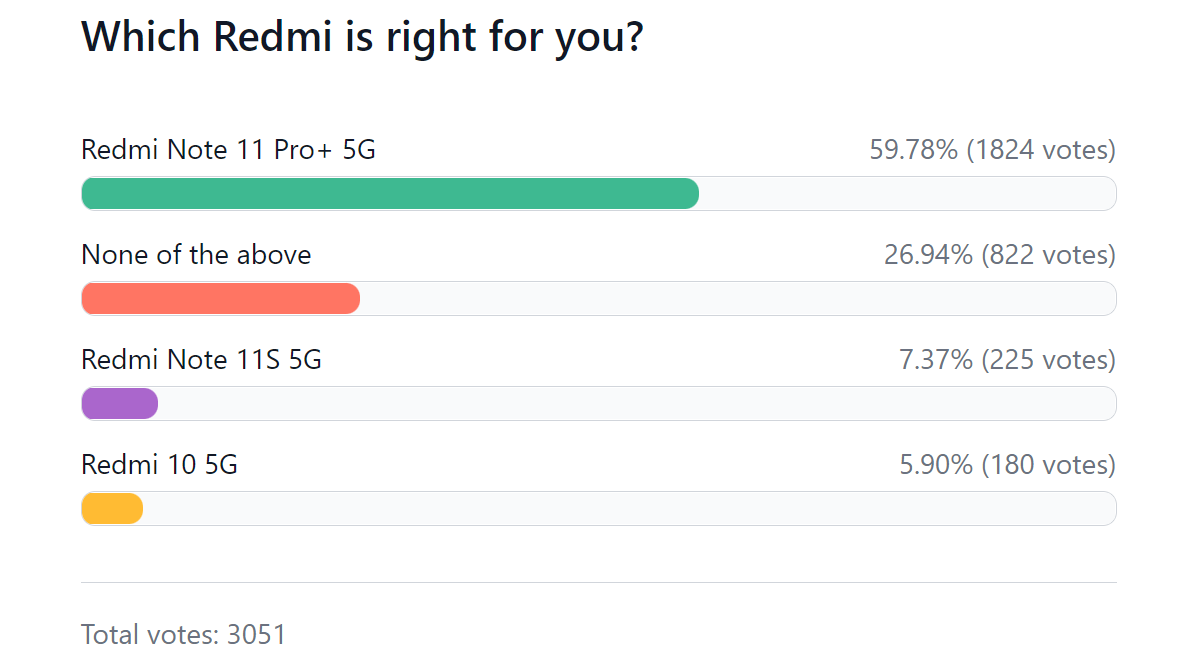 Poco f3 is the boss

I'm a user of redmi note 9..and new redmi note11s.. hopefully soon the pro+5g...and it's cheaper and pretty cam and for gaming too...I love it✌️