Manufacturers have been eager to push 18:9 screens – they are different from what came before and are usually coupled with thinner bezels, making the job of the marketing departments easier.

But most people seem fine with traditional 16:9 screen, 37% of voters in our poll picked that option. That said, nearly as many people, 34%, just want to have slender bezels. As we said before, an 18:9 screen is not a requirement for thin bezels, but these days the two go hand in hand.

Still, 1 in 4 people consider 18:9 screens – or even wider – to be the future of smartphones. Apps are quickly gaining support for the new aspect ratio and even the problem with multimedia content is solved by cropping the video a bit.

As the previous poll showed, manufacturers should mostly avoid resorting to cutouts when expanding the screen and reducing the bezels.

Surprisingly, many brought up 4:3 screens. Those were around in the early days of smartphones, but we don’t think they will work well now. It’s usually the width of the phone that limits its maximum size.

Gestures for the notification area, reachability and so on help with tall screens. But if a phone is too wide to hold comfortably, there are no software tricks that can make up for that. 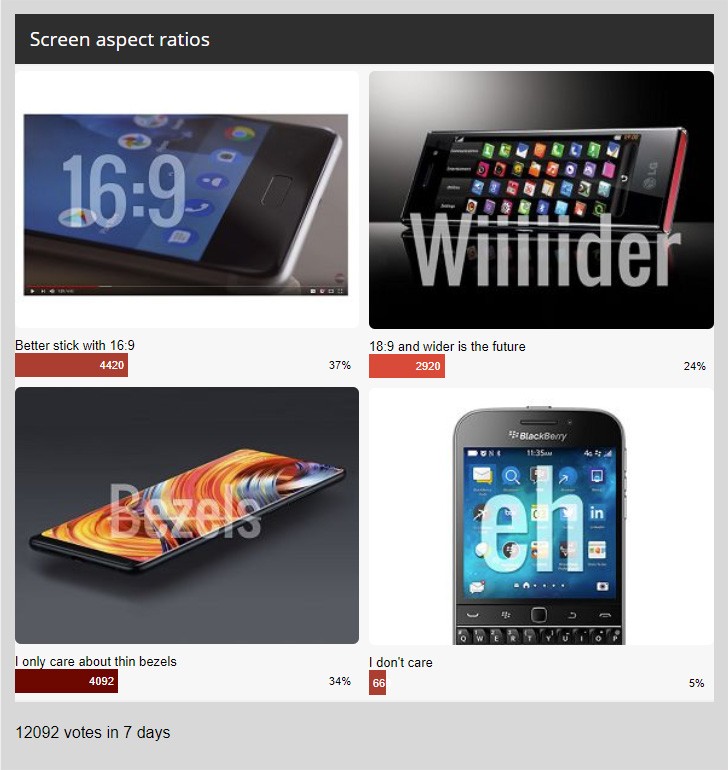 wth does this have to do with bezels

try Sony xa1ultra 6inch tractional phone £250 at the moment in uk.im buying 1 to go with my nexus 6 and hope they last to see out this trend.