WhatsApp enables two-step verification in its Android and Windows betas

Today WhatsApp has started turning on two-step verification in its beta releases for both Android and Windows Phone. On Android, this feature is live in version 2.16.341 and above (maybe even earlier). On the Windows side, you'll see it if you're using WhatsApp 2.16.280 or newer.

If you're using the betas for either operating system, you'll find the two-step verification option added to your account settings, as portrayed by the screenshot on the left in the image below. Once you tap on the new entry, you'll be taken to the Enable screen you can see in the right screenshot. 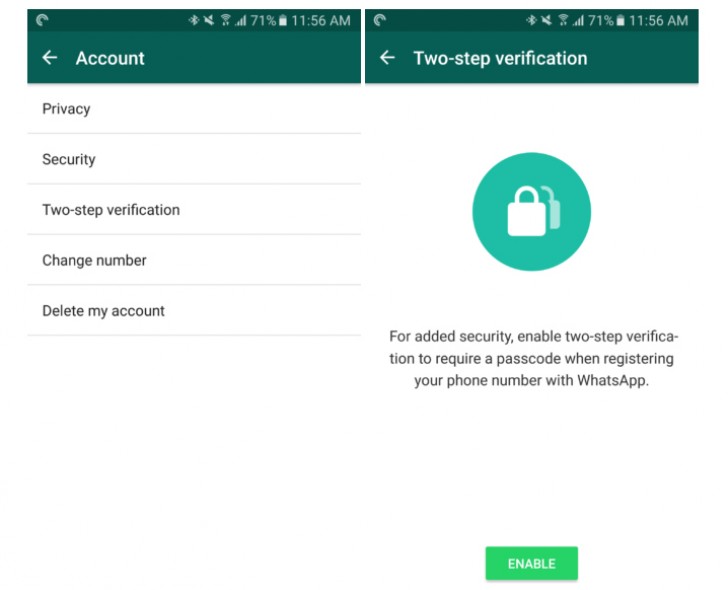 You need to enter a six-digit passcode that you'll be asked for every time you'll try to register your phone number with WhatsApp (for example, after you switch phones). Then you confirm said code and are given the chance to enter an email address which will be used to reset your passcode if you forget it. Once you get past that step, you're done.

From that point on, no one will be able to use WhatsApp with your phone number without entering the passcode or having access to your email (if you added an address). Once you've enabled two-step verification, tapping the eponymous option in the app's settings will let you disable the feature, change the passcode, or change the associated email address.

On Android, WhatsApp beta has also gained the ability to play audio messages in the background, so you don't need to stay in the conversation thread where such a message was posted in order to hear it. You can go elsewhere in WhatsApp or even switch to another app and still hear audio messages in their entirety.

For Windows phones, aside from two-step verification WhatsApp beta has also received a Storage Information section in Settings, which shows you how much storage is taken by WhatsApp messages and media.

To use this version of WhatsApp on Android, go to its Play Store listing and join the beta program. On Windows, just download WhatsApp Beta from the app store.

What about people who gets that number issued which was once used by someone else . According to this post they wont be able to use that number for their whatsapp account. Any ideas ??

from where did you get this information?

On earlier versions of windows (I think windows 7)