Facebook-owned WhatsApp is testing a new feature called "disappearing messages" that will let you send messages that disappear after a set interval.

This feature was spotted by WABetaInfo in version 2.19.275 of WhatsApp for Android's beta app in group chat settings. It allows you to send messages which would disappear automatically from the conversation after five seconds or one hour. 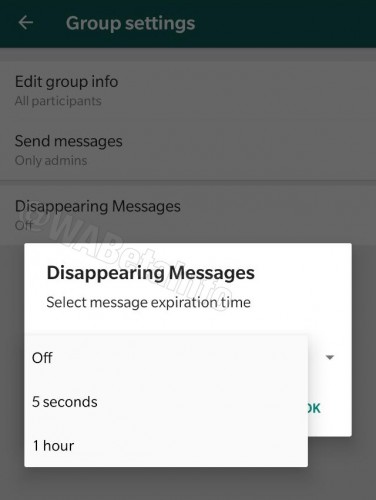 WABetaInfo reports that this new privacy feature is currently under development and it's unclear when it will be rolled out to users across the globe on the stable channel. However, beta users will be the first to get it, so if you are excited about this feature, you can enroll in the beta program and wait for its arrival.

Well now even our phones can act like a top secret agents from Mission Impossible movie.

i have no idea which world you live in, but among the hundreds of people i know, each and every one of those only use whatsapp. only and only whatsapp.