The Xiaomi Mi 10 Ultra stunned with its 120 W wired charging support, but the 50 W wireless charging capability surpasses what many phones can do with a cable plugged in. Using Xiaomi’s revamped charging technology, the phone’s 4,500 mAh battery can be filled fully in just 40 minutes.

The company posted a lengthy explanation on just how this technology works. The key was to change the layout of the bits between the coil and the battery – the charge pumps (these are DC-DC converters that are used to increase or decrease voltage). 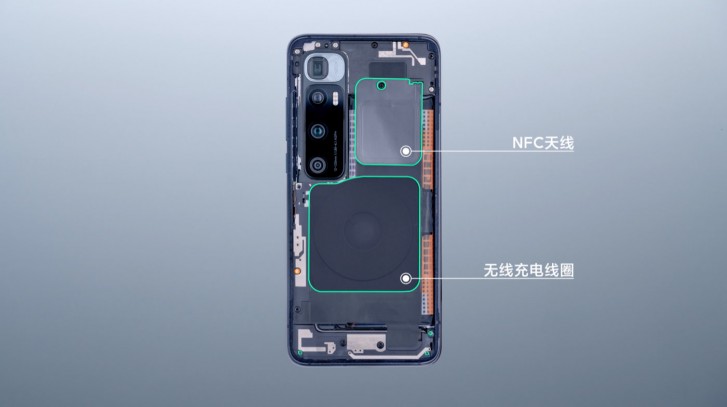 Instead of the traditional layout of having two charge pumps in series, Xiaomi put them in parallel. Voltage conversion is not 100% efficient – in fact, common charge pumps have 97% efficiency. And when there’s two of them in series, the inefficiency stacks (97% * 97% = 94%). With parallel pumps, that price is paid only once.

There’s more. Xiaomi used next generation charge pumps with 98.5% efficiency. It may seem like a small difference, but keep in mind that at 50 W even if only 1% turns to heat, it’s still a lot for something as small as a phone to handle.

The pumps are connected to the battery with highly conductive graphene-based material to further minimize losses. The battery itself is split into two cells of 2,250 mAh connected in series.

The coil is pretty advanced too. Multi-strand winding technology was used to tightly weave the wire in 5 layers, a design which helps concentrate the magnetic field and further reduce losses. Also, the phone is in constant communication with the charger, always adjusting its output current for optimal charging.

You can see the results above – the Mi 10 Ultra battery charges much faster than even the 40 W wireless charging tech used in the Huawei P40 Pro+ (which has a slightly smaller battery to boot).

This is great, and I intend to wait for this to hit Europe instead of getting the Mi 10 Pro. A little question, as I won't be buying multiple 120w chargers. Is there any negatives with the new battery layouts and standard (fast) chargers? ...

Guys, information like that is just like diamond in the feed of thousands and thousands similar phones. And technologies that makes communication devices small and lightweight is something I finally would like to see in the action in the next decade...

98.5% efficiency, that can't be right for wireless?