Xiaomi Gemini (Mi 5) appears on Geekbench, will use Snapdragon 820

Xiaomi has chosen not to respect the de facto standard one-year update cycle for its Mi 4 flagship, instead pumping out differently-specced versions of it. The Mi 4i and Mi 4c were thus born, but successful as they may be, a proper high-end heir is called for.

Apparently, what is going to be the Mi 5 lives an underground life as Xiaomi Gemini, as indicated by a Geekbench listing.

The benchmark entry shows that the smartphone is powered by a msm8996 chipset, which is the internal designation of the mighty Snapdragon 820. 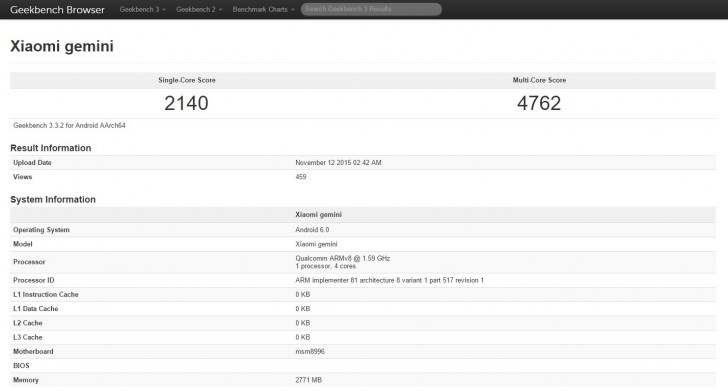 Mighty it is within the Mi 5, scoring a whopping 2,140 in the single-core test, where Qualcomm's unfortunate Snapdragon 810 scores around the 1,300 mark. Current Exynos heavyweights from the Samsung Galaxy line are good for about 1,500 points, but the top dog in single-core performance remains the Apple A9 chip with results in the 2,500 ballpark.

Multi-core numbers are perhaps not as impressive, as the Gemini is outclassed by the Galaxy S6 generation, which can all push upwards of 5,000.

Whatever the numbers, Xiaomi's future flagship will come with a Qualcomm Snapdragon 820 inside, and with that chip only - no parallel models will be made. Earlier reports indicated that there might be tension between the two companies, but a Weibo post by analyst Kevin King, director of Chinese IHS Technology Research dismisses the issue.

I'd go along with that thinking, I can't wait to see what kind of performance those companies can get out of the 820. I always enjoyed any product I've owned that has featured a Snapdragon SOC (a recent spell with the Xperia Z5 and its 810 aside) I d...