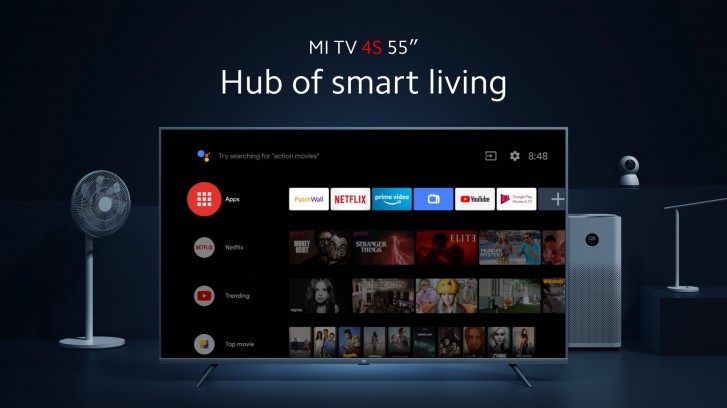 Both the 55-inch and the 43-inch versions come with 4K HDR screen and MEMC technology for fluid images. They have a Mediatek 6886 chipset on the inside with a quad-core CPU, coupled with 2 GB RAM and 8 GB storage.

The TV is running on Android 9 Pie and supports Bluetooth Low Energy for hooking up a wireless keyboard, mouse, or even a headset. On the back, the 4S 55” has three HDMI and three USB ports (the 43" version has just two USBs), while the wireless connectivity is complemented by Wi-Fi on both frequencies - 2.4 GHz and 5 GHz.

Since the set runs on Android, you will have all the major TV platforms like Netflix, Amazon, Youtube readily available. It also has a Bluetooth remote control with Google Assistant button, because writing might become a hassle at some point.

The Mi TV 4A 32" is truly a budget solution with its HD screen that has 1366 x 768 resolution. It has a quad-core CPU with four Cortex-A53 units and 1 GB RAM. It can support all major image and video file sizes and has plenty of ports for all your needs. It still is Android TV, so all the content apps can be found in the app store.

i am gona buy this tv, is it worth