Xiaomi to unveil one more device alongside Mi Mix 2

Xiaomi may unveil more than one device at its September 11 event. As you might already know, one of the devices is already confirmed to be the Mi Mix 2, but there's no information about the second one.

The Chinese company's president Lin Bin who dropped hints about a second product unveiling in a recent Weibo post. 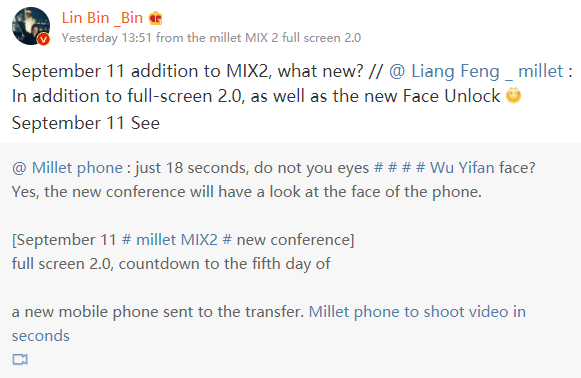 The first-gen Mi Mix went official last October. Alongside it, the company also unveiled the Mi Note 2. So it's reasonable to assume that the second device that Xiaomi president is talking about could well be the Mi Note 3. Adding weight to this assumption are recent rumors that the Mi Note 3 may arrive sooner than expected.

Anyway, the wait isn't long - the suspense will be over in a less than a week. So moving on, the post also confirms the Mi Mix 2 will feature the already-rumored facial recognition feature.

Lin Bin also shared a teaser video for the Mi Mix 2. It's difficult to spot the exact design of the device, not only because the video is shot that way (it's a teaser), but the clip is blurry as well.

Xiaomi Mi Note 3 may arrive as soon as this month

You are right, my friend. Hope the phones in the future will be durable, from inside as well as outside.