Xiaomi has been rumored to launch a new Mi 10 phone, powered by the Snapdragon 870, and the company has now officially confirmed it. The new phone will be called Xiaomi Mi 10S and will be unveiled on March 10.

The device will have a 108MP camera and while the setup looks like the Mi 10 Ultra at first glance, there are some major differences, revealing this isn’t a rebranded phone with new internals. 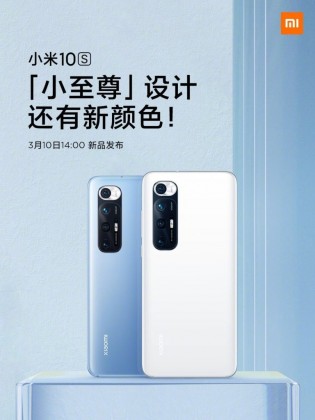 The Mi 10S will have a four-cam setup, with the sensor behind the main shooter being 108MP. There is also a dual-LED flash, but the phone does not have a periscope lens - we are likely looking at wide, ultra, macro and depth shooters.

The front panel is not showcased, but we believe it will be AMOLED with the fingerprint scanner underneath since the back panel has no sensor, nor is embedded into the power button. The phone is seen on TENAA with a single punch hole in the left for the front-facing camera.

Expectations are the Xiaomi Mi 10S to have a Snapdragon 870 chipset, and a 5,000 mAh battery with 33W fast-charging, but we’ll know for sure at the unveiling this Wednesday.

I will wait until the 11t series

Moving parts of are not really a problem. This isn't a hdd