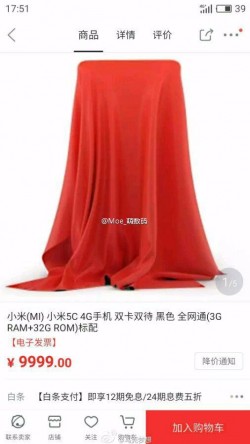 Xiaomi Mi 5c has been leaking for quite some time and its premiere seems imminent now. The device was supposed to go official on December 6, but that didn't happen.

The Chinese retailer Tmall has added the Mi 5c in its listings though and essentially confirmed the previously known specs. Xiaomi Mi 5c will come warped in a metal body and offer a 1080p display, an octa-core 2.2GHz processor, 32GB storage, and 3GB of RAM.

Xiaomi will be taking the plastic off its mid-range smartphones and keep it for the entry level droids only.

There is still no word on if the Mi 5c will come with two screen seizes or not, as previously reported. And you should ignore the listing's price, the actual one should be around CNY 1,500 or even less.

The Mi 5c is rumored to launch on Android Marshmallow with MIUI8 and later it could be upgraded to Android 7 Nougat.

Will it launch in india

mi note pro did not get android 6.0. please google before you post.