The successor of the Xiaomi Mi 5X already popped up on TENAA with plenty of specs. While some of them are expected, like a tall screen and dual-cam setup on the back, today a new leak on the Mi 6X suggested the chipset would be the not-so-popular Snapdragon 626. 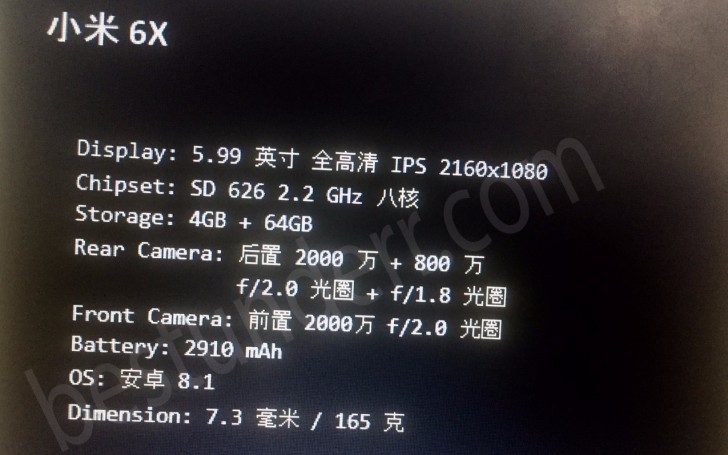 The Xiaomi Mi 6X will have a 5.99” IPS LCD panel with Full HD+ resolution. The SoC, also seen in recently announced vivo V9 or the modular Moto Z2 Play, is a minor upgrade over the Snapdragon 625. Its eight CPU cores are still Cortex-A53, but this time they can reach clocking speed of 2.2 GHz, while the GPU remains Adreno 506.

The leaked spec sheet says storage is 4 GB + 64 GB, while the dual camera will have 20 MP + 8 MP setup, the latter with a relatively big aperture of f/1.8. Selfie snapper will be a 20 MP F/2.0 unit. The OS is listed as Android Oreo 8.1 - the Mi 6X is most likely to have MIUI 9.5 with limited Google services on top, while the global A2 should have stock Android.

Xiaomi Mi A2 appears on TENAA with dual cameras

can you please post about the latest model or processor .