The Mi 9 Lite is the Xiaomi we all know and like but with a few extra twists. The never-ending expansion of the Mi 9 series has brought the Mi 9T and Mi 9 SE, and now we have the Pro and Lite. And while all those Mi phones had many different key selling points, one thing stayed the same across all - the design. 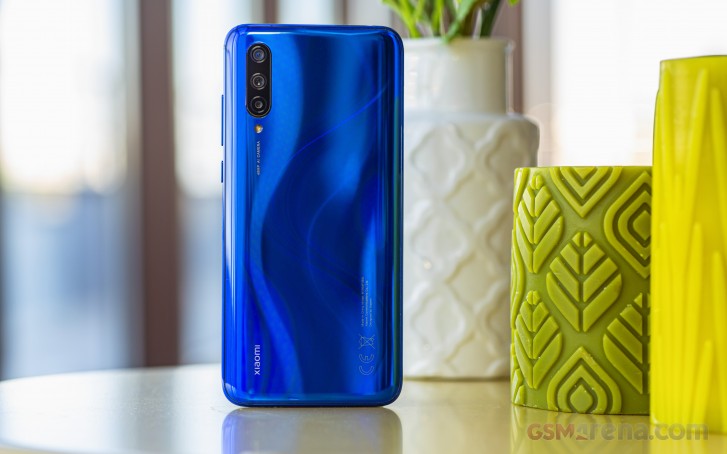 The Mi 9 Lite is just as good looking and well-built as the rest of them. It has a dual-glass shell secured with a metal frame - the most trending composition this year. It seems the makers have reached an unspoken consensus about what's best for a smartphone, and the dual-glass build was unanimously chosen. But we are glad some like Huawei and Xiaomi found a way to make theirs stand out and its all in the paint.

Indeed, the front of the Mi 9 Lite looks like any other midranger and even with a visible homescreen - it's hard to tell the brand, let alone the model. The 6.39" AMOLED panel, notched or not, is an integral part of more than 70 smartphones in our database, and 15 of those are Xiaomi's. So, we'd forgive anyone that's having a hard time picking the Mi 9 Lite from a crowd. 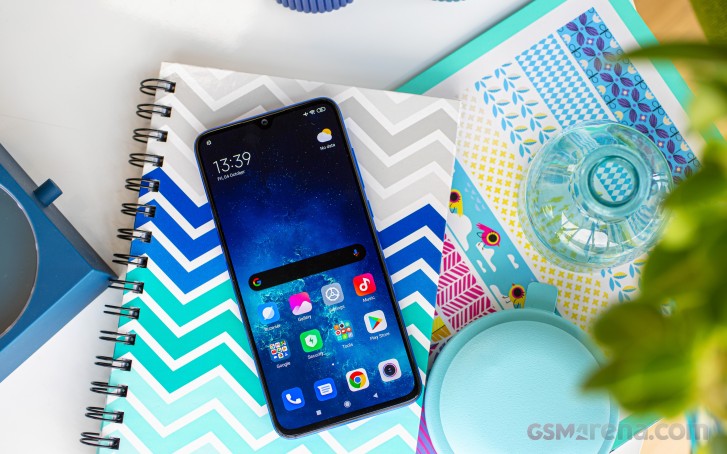 The AMOLED screen on the Mi 9 Lite has a waterdrop-shaped notch for the 32MP selfies camera. Around are hidden a couple of sensors, while the earpiece grille is almost invisibly etched slightly above the selfie shooter. 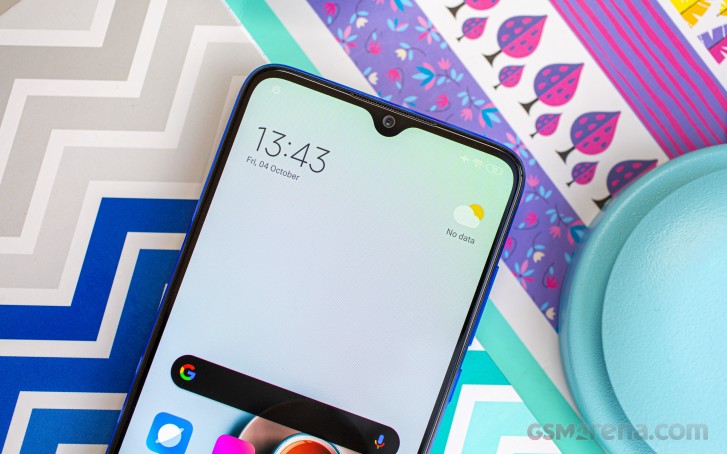 The screen bezels are quite thin, especially for the asking price. Then the entire front is shielded with a Gorilla Glass 5 - surprisingly good protection for the class. But wait, there is one more premium feature that is invisible to the naked eye - the under-screen fingerprint scanner. The optical fingerprint reader is around the bottom of the screen and works as on any other recent Xiaomi - lights up the moment you touch the screen, works pretty accurate, and fast. We can't describe its experience as stellar, but we'd settle on very good for sure. And one more thing we noticed and then confirmed with the official specs - the Mi 9 Lite has fingerprint- and oil-resistant coating applied on its screen. While it won't keep smudges away forever, such take longer to appear and are easier to clean.

The back of our blue Xiaomi Mi 9 Lite is simply captivating, hypnotizing if you will. It looks blue at first, but after it catches and traps some light between the different layers of paint, you will notice some subtle S-shapes top to bottom. The best way to describe this effect is like two oceans meeting in the middle and yet managing to stay calm. 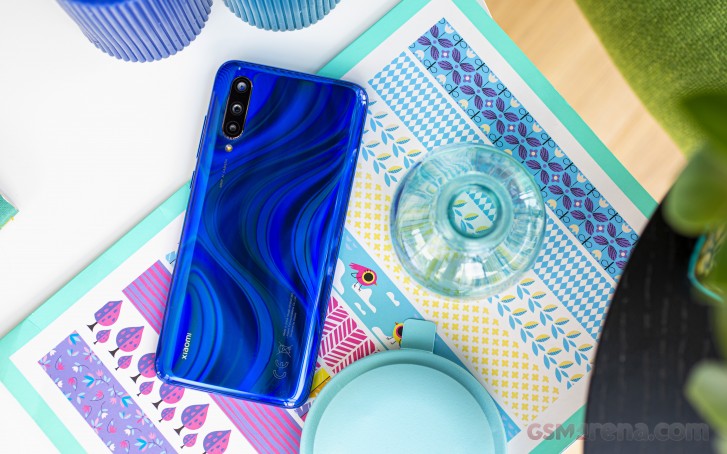 The rear glass is not specified to be Gorilla glass or similar, and it's very glossy, but thanks to the eye-catchy paint, you'd barely notice smudges or fingerprints. The glass is bent towards the longer edges as it often happens - and while this indeed adds points for looks, it undermins the grip a lot. Xiaomi is shipping the Mi 9 Lite with a transparent case in the box, so you can can have the unspoilt looks with some added grippiness.

The three cameras share a single long hump at the back. Even though it is quite thin, the wobbling on a desk is rather insignificant.

At the top is the ultrawide shooter, followed by the 48MP primary cam, and the 2MP depth sensor is last. The LED flash is outside of this arrangement. 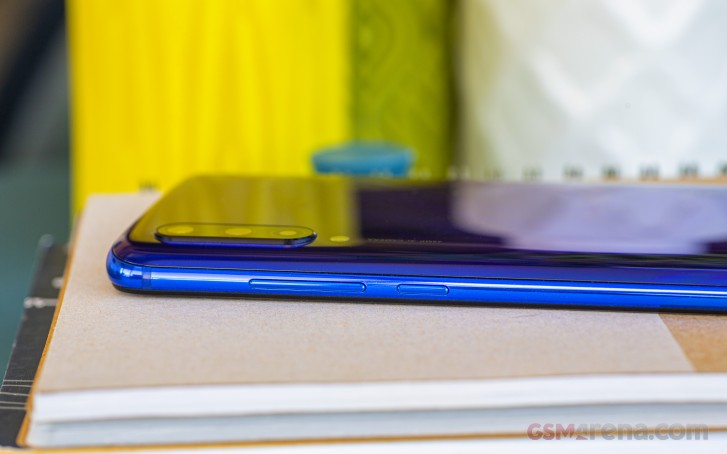 There is one more feature at the back that we noticed a few days after we were using the Mi 9 Lite. See that XIAOMI inscription around the bottom? It's a notification LED light! The whole thing flashes in different colors upon new notifications, calls, even when playing music. Its placement is surely awkward as few people keep their phones lying on their screens, but it is undeniably cool. 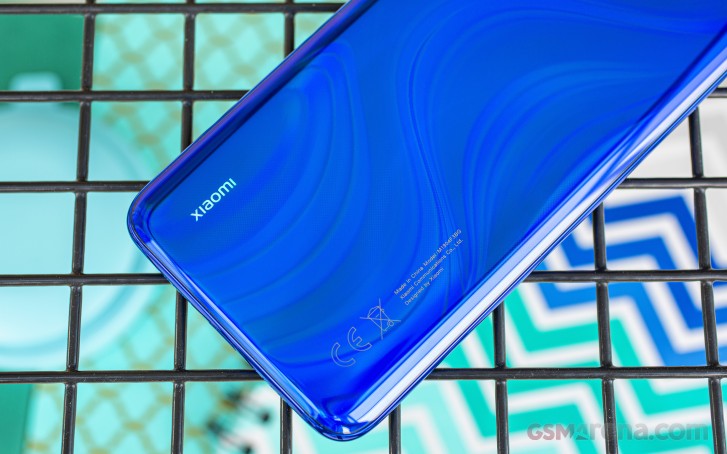 The frame is quite thin, made of metal, and with a very glossy finish on top of its blue paint. It has the hybrid SIM slot on its right, and the usual volume and power keys on the left.

On top of that frame are the 3.5mm audio jack and the IR blaster, while the bottom houses the usual - the speaker, the mouthpiece, and the USB-C port. 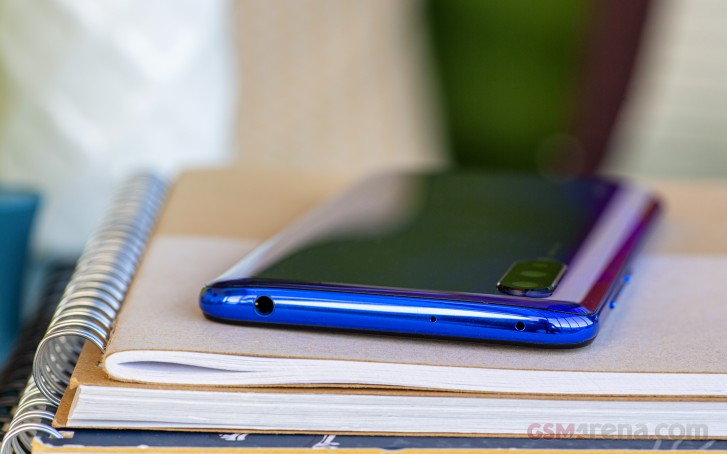 Xiaomi Mi 9 Lite has flagship looks and premium build in line with the most current trends. It doesn't offer a secure grip, and yet it is still a pleasure to handle, and we appreciate the slim profile. We were also happy to find smudge-resistant coating on the screen, which is still not that common these days. Overall, the Lite is one well-executed smartphone, in line with the rest of the Mi 9 series.

It's a glass mate.

I don't know yours, but mine is glass yes!

Back : Plastic! No glass!