The Xiaomi Mi 9 will have two pricey special editions (the Alita-themed transparent and the Explorer ones), but there will also be a Xiaomi Mi 9 SE at a lower price. That price isn’t known yet, but it will be less than the CNY 3,300 ($480/€430) for the vanilla Mi 9.

Both the Mi 9 and the SE are on JD.com with placeholder prices. The Mi 9 SE should ship between March 11 and 20, nearly a month after the official unveiling event scheduled for this Wednesday, February 20. 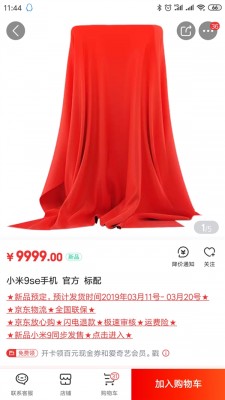 JD.com already has a landing page for the Xiaomi Mi 9 SE

Reservations will start in a couple of days, so just after the new phones are announced. It’s not clear if the more premium Xiaomi Mi 9 will start shipping before mid-March or if both it and the SE sit on pre-order for a few weeks.

How do you know how well the MI 9 software / hardware performs with that battery? Someone done a benchmark? Or, like others, you think the only thing that matters is the battery capacity :/