The Xiaomi Mi 9T is yet another glass-sandwich smartphone but the maker did spice things up and succeeded in making the Mi 9T both unique and recognizable.

The Mi 9T builds on the Mi 9 flagship size, but now it uses a notch-free edge-to-edge 6.39" AMOLED panel, probably the same one we saw on the Mi Mix 3. It is protected by a flat piece of Gorilla Glass 5 and has tiny bezels but somewhat noticeable chin. 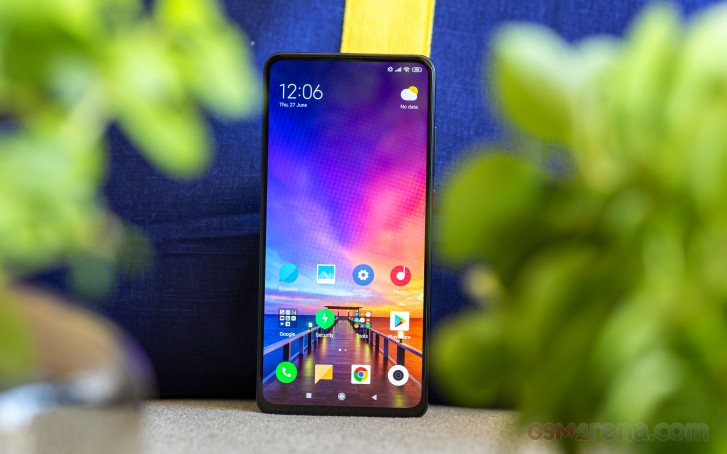 The earpiece is etched between the glass and the screen and is hard to spot even if you are looking for it. The ambient light sensor is placed beneath the screen, and you will never see it.

Underneath the screen is an optical fingerprint scanner, but Xiaomi says it has been improved since the Mi 9. Indeed, we can confirm it works much faster and almost like a conventional one. It lights up the moment you touch the screen; it scans your finger and unlocks immediately. So, it's not just a PR talk, Xiaomi did better this time, and we found the experience to be brilliant as far as these sensors allow. 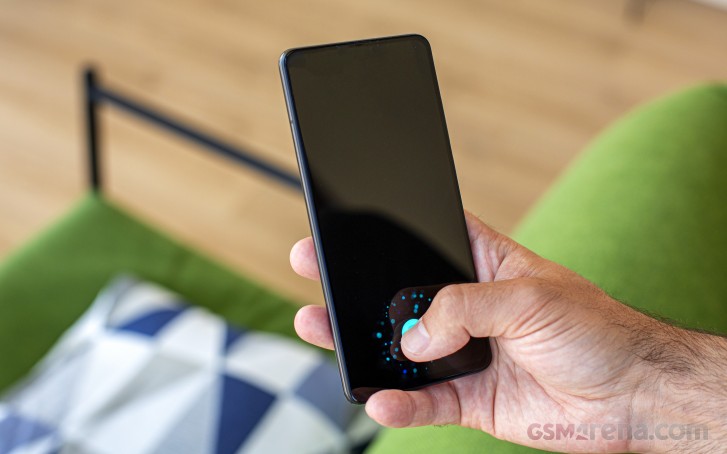 Instead of a whole sliding-out piece like on the Mi Mix 3, Xiaomi opted for a pop-up module to solve the selfie camera conundrum. It's on the left side of the top, has a motorized mechanism, and rises automatically when you switch to selfie camera or hit the power button and have face unlock enabled. 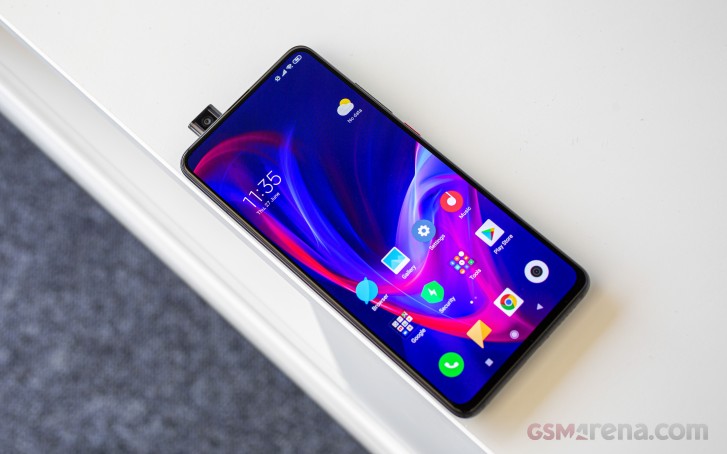 There is one very nice LED accent light built into the pop-up, and in the case of this Carbon Black model it lights up the entire module in red. It does so only on when it opening or closing. It seems like a huge missed opportunity for a hidden selfie flash, and we rather have that feature instead of a pointless decoration. 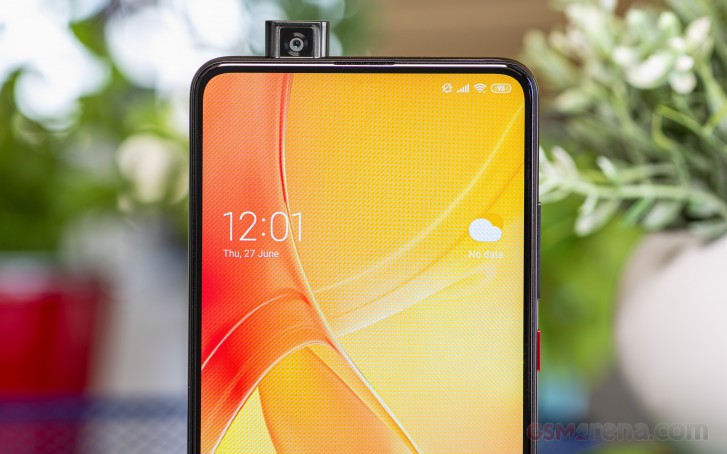 Xiaomi says it will automatically retract when the phone senses a free fall. We tried this a couple of times (above a big couch, of course) and we can confirm if you are in selfie camera mode and drop the phone, the module goes down almost immediately. It takes a second to retract completely though. If the fall is from less than a meter height, it may not be retracted entirely by the time the phone hits the ground, but it still should be safe as the mechanism will be disengaged and on its way down.

Of course, you can push it down, and it will close without breaking too, but it takes more force to push down than what we've seen elsewhere so it's probably for the better that it will retract on its own.

Finally, Xiaomi promises at least 300 000 iterations before any possibile failure of the motorized mechanism. A quick calculation says that if you open and close it about 100 times each day, it will take more than 8 years to reach the guaranteed lifespan.

The Mi 9T has a curved metal frame keeping the two glass pieces together. It has a slippery, glossy finish and is painted to match the color of the rear glass. This roundness and glossiness won't help the grip, so if you feel the phone insecure in hand, you can use the provided case.

And speaking about the frame, on the top, next to the pop-up selfie cam is the 3.5mm audio jack. Meanwhile, the bottom houses the dual-SIM tray, the USB-C port, and the speaker grille.

The back is quite impressive. It's made of a single piece of glass, though Xiaomi hasn't mentioned its maker. The glass is bent towards its longer edges - a well-known technique for creating an illusion for a thinner profile, and it does work as intended. It boosts the looks, too. 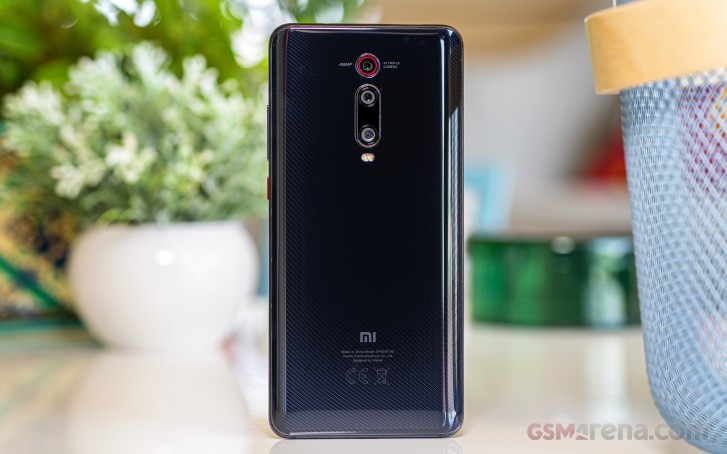 The trio of the main cameras is at the back, with one snapper sitting outside of the distinct setup. First, sitting alone above the hump housing the other two cameras is the 8MP tele camera with a 52mm zoom lens. It has a red accent around the glass, matching the red strip of the selfie camera and the red on the power button.

The 48MP written next to it would have you believe that this is the main 48MP snapper. 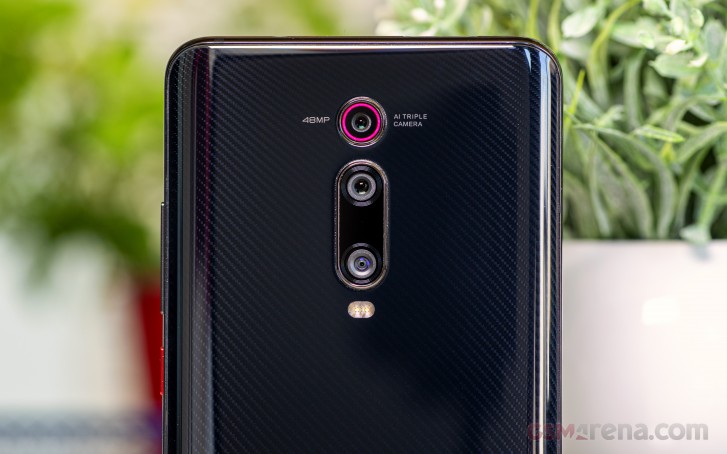 The reality is that the primary sensor is actually second, and the 13MP snapper with 15mm ultra-wide-angle lens is third. Both share the same spot, and the camera island is sticking out just a weeny bit and not enough to make the whole phone wobble.

Finally, the dual-LED flash is outside this combo, just below it. 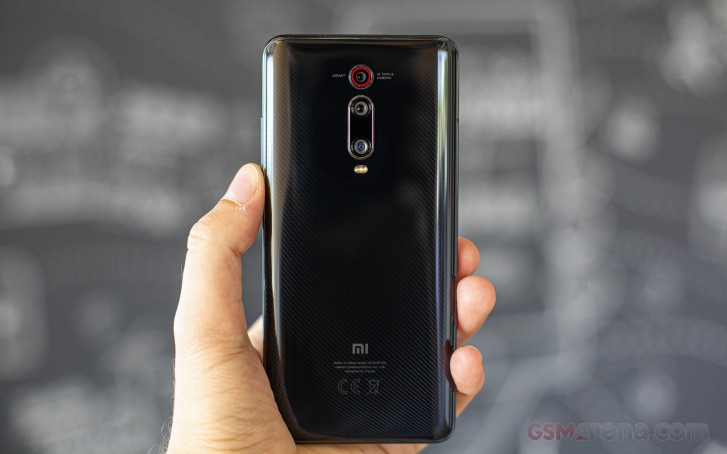 We spoke about Xiaomi making the Mi 9T unique, and it's all thanks to the whimsical paint jobs. Our model is the Carbon Black color, which has a carbon fiber pattern beneath the surface. It still looks dashing, and we like it very much. But...

The Flame Red and Glacier Blue options are the truly dazzling ones. They are both have gradients from red or blue towards black and feature these icy patterns on their lighter parts. There are no other phones like these, and we'd say the frost-like paint is the one to get if you are shopping a Mi 9T phone. 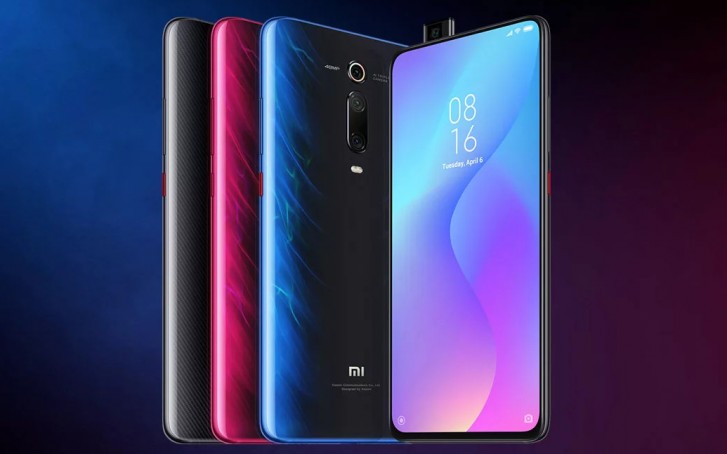 The Xiaomi Mi 9 series is now probably complete, and the Mi 9T is quite distinctive with the absence of a screen cutout. Meanwhile, the Mi 9 SE is the pocket-friendly one, while the Mi 9, well, has the most power under the hood. 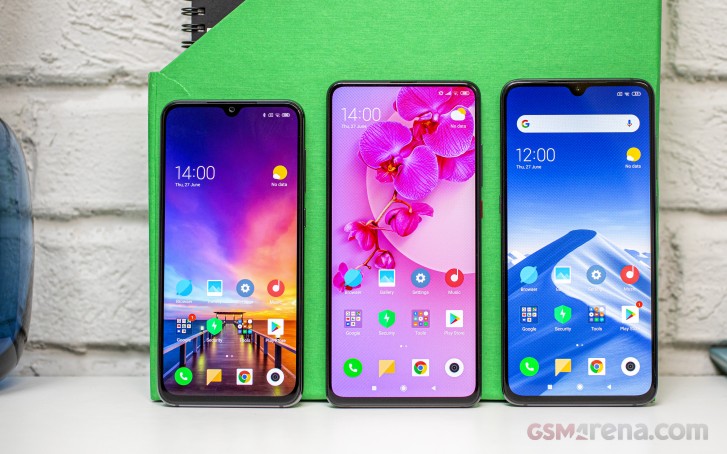 Handling the Mi 9T would leave nothing but great impressions, meaning mostly slippery and very pleasant on touch and look. It's a big phone, but not gigantic. Most users will be happy with its form factor and solid build. And if it's too slippery, there is a case in the package waiting to serve its purpose.

Is there a good competition now? i bought mi 9t as a gift for my girlfriend more then 2 years ago and it still good: the camera is awesome its not lagging its fast enough the battery is still ok after this time good screen the ...