Xiaomi held an event in New Delhi to announce its latest dual-camera device. Called Xiaomi Mi A1 its hardware is identical to the Xiaomi Mi 5X. However A1 stands for Android One and the phone is powered by stock Android 7.1.2 Nougat.

The Mi A1 features a Snapdragon 625 chipset, built on the 14 nm process, coupled with 4 GB RAM and 64 GB storage. The LCD measures 5.5” and sports Full HD resolution.

At the back the phone has dual cameras, similar to the flagship Mi 6 setup with a dual-tone LED flash. The fingerprint scanner is also there, but on the lower side, we see an “Android One” label, placing the phone in the portfolio of Google’s affordable devices for developing markets. Under the hood is a 3,080 mAh battery, charged through USB-C.

The stock Android means Xiaomi is launching the device without MIUI 9, but the Chinese manufacturer is keeping the MIUI camera app. The phone also arrives with promises that the OS will be updated to Oreo by the end of the year. The Mi A1 will be one of the first phones to get the Android P sometime next year. 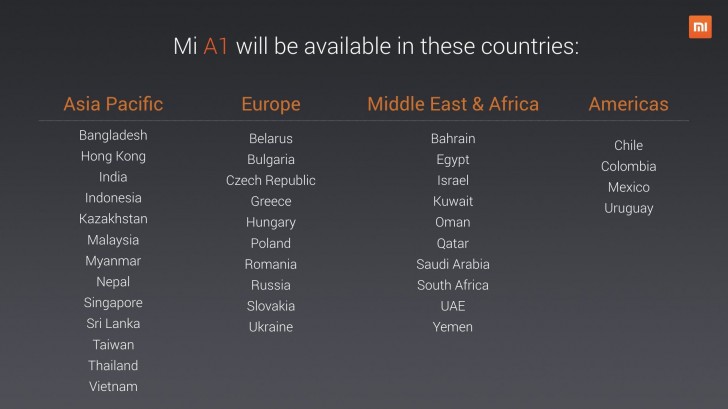 The Xiaomi Mi A1 comes in Black, Gold or Pink and costs INR14,999 (just under €200). It is going to be available in 37 countries across the globe and sales are starting on September 12 in various online and offline stores.

Xiaomi Mi A1 shines on Geekbench

Xiaomi's Android One smartphone rumored to be called Mi A1, to sport full screen display

Redmi compromising with quality of screen..i am redmi note 4 owner..and facing stuck pixel problem..when i started searching the solution of problem i came to know that almost all redmi device facing ..stuck pixel and dead pixel problem..and its next...

I understand it's the same processor which has been used in P2 however the the battery is almost 40% smaller battery so I might lose 3.5-4hrs of SoT. I'm not a gamer or heavy application user but a frequent traveller and phone dependant!

Do you even understand what my point is? All this time, every time a programmer wants to port MIUI camera to non-MIUI ROM, they're stuck because Xiaomi said the camera app is connected to MIUI framework. But this time, the same camera app works in st...