Amazon reveals Xiaomi Mi A3 Indian price ahead of launch

Xiaomi is set to launch the Mi A3 in India on August 21, which is also when the official pricing will be announced. However, Xiaomi's launch partner Amazon went ahead and revealed the price of the phone two days earlier. 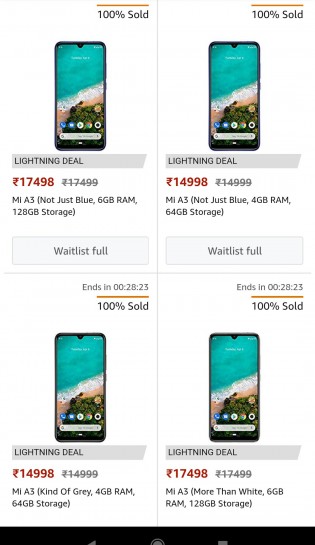 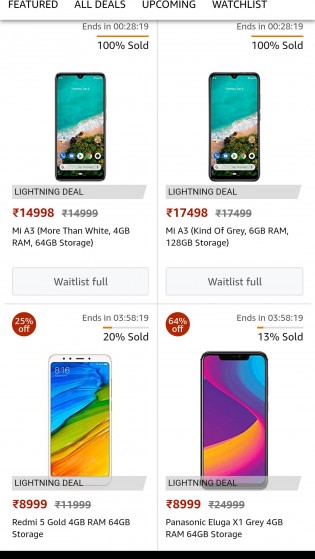 Mi A3 pricing and variants

Twitter user Mukul Sharma caught the listings for the device, which appeared in the deals section but weren't actually available for purchase. Among the listings were the two storage variants, 64GB and 128GB, which will come with 4GB and 6GB of RAM, respectively. There are also three color options named Not Just Blue, More Than White, and Kind of Grey.

We tried looking up the device ourselves on the Amazon India website but it seems Amazon has removed the listings since the original screenshots were taken.

It's not uncommon for manufacturers to leak the price ahead of release to temper expectations. The Mi A3 is already being lambasted by some people who haven't taken too kindly to the presence of a sub-1080p display on the smartphone. The price, if true, is also on the higher side and on the same level as phones such as the Realme X and Xiaomi's own Redmi Note 7 Pro, which not just have higher resolution displays but also more powerful chipsets.

So this might just be our tinfoil hat speaking but it's likely these prices were revealed two days ahead of release to get most of the negative reactions out before the phone is officially announced on Wednesday.

The Redmi K40 will be a gaming phone too, with 300+ Hz touch sampling rate and gaming accessories

Gaming is not everything on a lower specced device with really high price comparing to others.