Xiaomi should be unveiling the Mi Max 2 at an event tomorrow. Before that had a chance to happen, someone in the possession of a prototype of the device decided to find out how it would do in Geekbench 4.1.

As usual, the benchmark run has revealed some of the phone's specs. According to Geekbench's info listing, the Mi Max 2 is powered by either the Snapdragon 625 or 626 chipset, paired with 4GB of RAM. It runs Android 7.1.1 Nougat, undoubtedly underneath Xiaomi's very own MIUI. 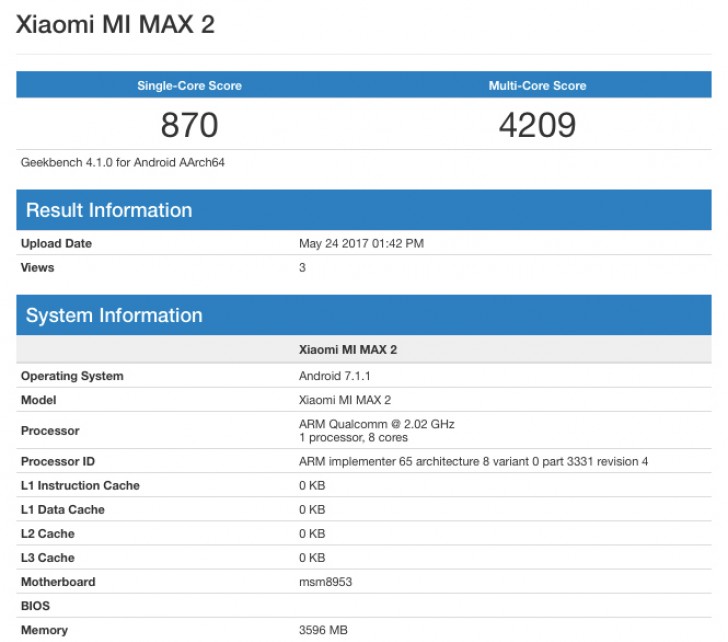 The Mi Max 2 has been rumored to come with the Snapdragon 626, so that makes sense. We can't be 100% sure because both the SD625 and SD626 could be reported by Geekbench as having the model number MSM8953, because they do - the SD626 is technically referred to as MSM8953Pro, but the benchmark might not show those last three letters.

Both of those SoCs use the Adreno 506 GPU, which is what GFXBench reported the Mi Max 2 as having when it stopped by that particular benchmark's database last month. While Geekbench isn't telling us anything else about the handset's specs, from that GFXBench run we know that it will have a 6.4-inch 1080p touchscreen, 128GB of built-in storage, a 12 MP main camera, and a 5 MP selfie unit.

Xiaomi Mi Max 2 gets pictured inside a transparent case

mi max is great phone,just lack of fast charging. Their selling point for this phone is not on performance...is on the battery which can lasts up 2 days usage per charge. guess have to wait note 5 for 660 :/

Pretty much. Lay people don't know any better. I had people tell me how their phone has 8 cores (low freq A53), so is faster than my quad core SD820 and ip7. Ya no. I told them to go buy a decacore ;o Now they believe Mediatek is the best chipset.