Xiaomi is expected to launch the Mi CC9 Pro next week, and the phone with 108 MP five-cam setup is going on the international market under a different name - Mi Note 10. While we thought they might be launched at the same time, today the Facebook page of Xiaomi Poland revealed it will have a premiere for new products on November 14, using the five-cam logo.

The smartphone is expected to have all cameras on the back lined up vertically, coupled with two dual-LED flashes. Later Xiaomi posted two images on its social media channels, including the Polish version, where it is demonstrating the zoom levels of the camera.

The Mi CC9 Pro/Mi Note 10 will have a 5x telephoto lens, which, coupled with the digital zoom, can get as high as 50x. The images below are taken in Alfama, a neighborhood in the Portuguese city of Lisabon, and we can clearly see the name of the ship "Vision of Seas", despite the actual vessel being more than 500 meters away. 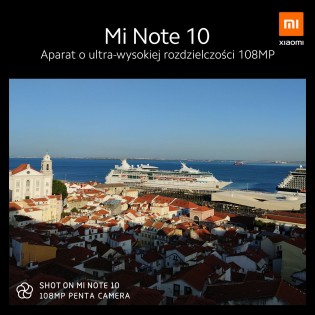 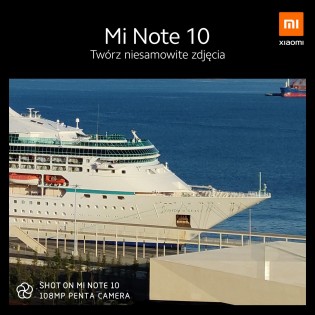 The phone is expected to have a Snapdragon 730G chipset, curved edges of the screen and a waterdrop notch for the selfie camera. It will launch in at least two colors - Green and Pearl/Nordic White, and with five days to the official unveiling in China, we expect to see more details and specs from Xiaomi.

Xiaomi Mi CC9 Pro to arrive with a waterdrop notch

Xiaomi teases a curved screen for the Mi CC9 Pro, shows off its zoom camera on video

There is OIS on two of the cameras (Main + Telephoto).