The Xiaomi Mi Smart Band 5 (also called Mi Band 5 in some markets) has been announced earlier this year. We've spent over a month with the wearable to see what new features the company has brought and whether it is worth upgrading from last year's Mi Smart Band 4.

On paper, the new band has a range of new features that should make the daily usage even more comfortable than before, so we strapped the band and here's what we have to say after a lengthy testing period. 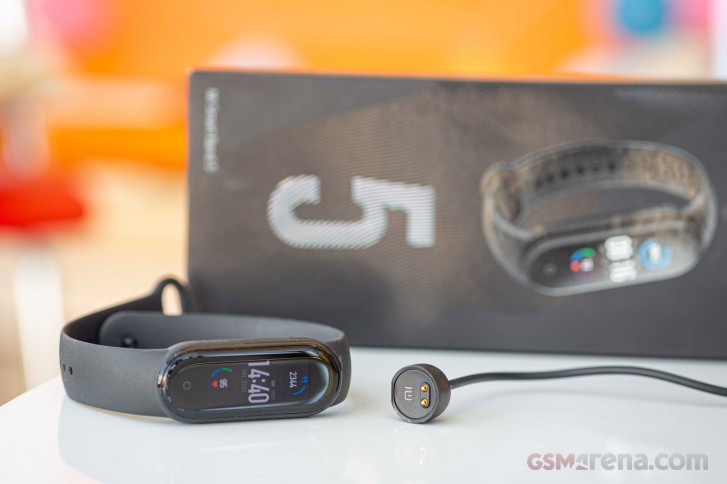 The first thing you see out of the box is the new charger. This is the third Mi Band in a row with a new charging solution; it is getting rather overwhelming to have a new proprietary cable in a world where we should rather look for ways of limiting its waste and dependence on electronics.

This time Xiaomi decided to go with two pogo pins coupled with a magnet so the gadget can stay in its rubber band while charging. This is the first time a Mi Band can do this - up until now users had to take the pill out of the band, shortening the strap's life. 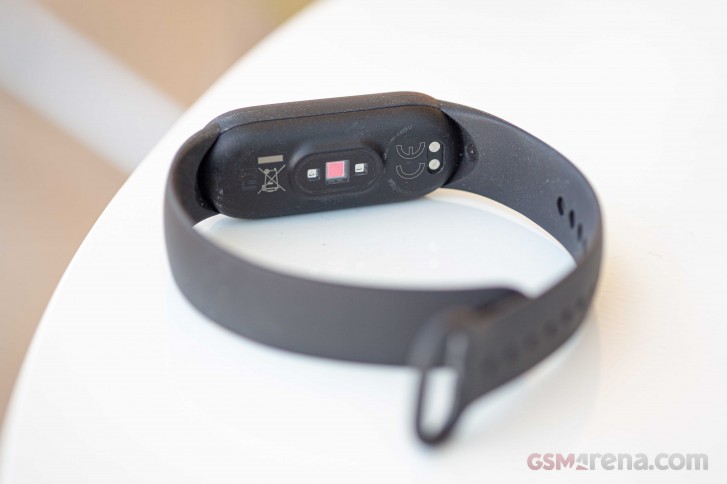 The Mi Band 5 has also grown in size, meaning the straps are not interchangeable with the predecessor. The edges of the front panel are ever so slightly curved to give it a more finished look - this is definitely the best-looking Mi Band ever produced by Xiaomi.

Now we have a 1.1" OLED screen, which is about 15% larger than the Mi Band 4. There are over 65 readily available watch faces that can provide up to three different pieces of information from a wide range, but the more important feature is Photo Watch Face - Xiaomi finally gives its users the ability to customize the looks of the band and put a custom photo as a background. 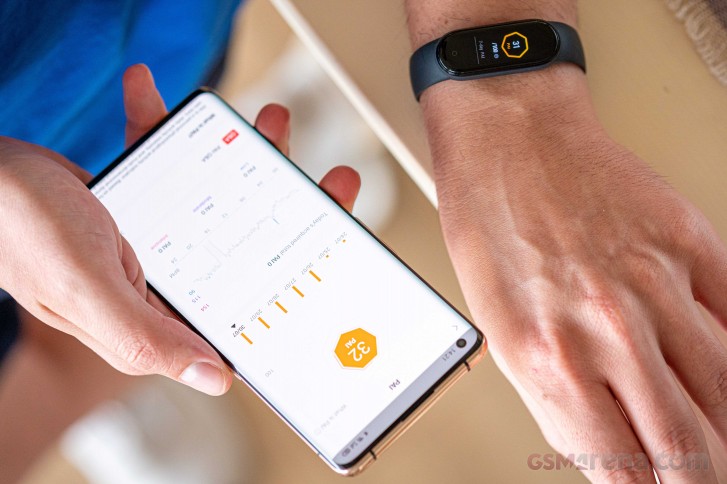 The front side is the more intriguing - the back is pretty standard with the usual heart rate sensor, Mi logo, pogo pins. There are little curves in the rubber strap to make the band a bit more comfortable, but it accumulates a lot of dirt. However, we live in pandemic times in which we should continuously wash our hands for 20 seconds minimum, so the grime accumulation is hardly going to be an issue.

The Mi Band 4 brought 7 sports modes, but the Mi Band 5 extended the list to 11. Aside from the obvious running and cycling modes, there is now Rowing Machine where the band counts the strokes, the drive time and suggests a time for recovery; also counts the performance during jumping rope or being on the elliptical. 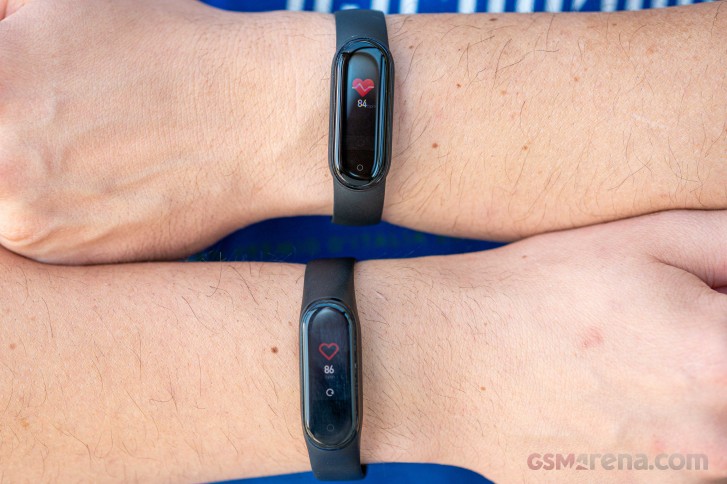 The breathing feature works pretty simple and is an excellent addition to combat the constant stress in our life - an animation and a quick vibrating buzz tell you when to inhale and when to exhale. It might sound useless until you finally decide to relax and concentrate on your breathing for a minute, and then you realize the world has gotten a tad better because the problems are further away from the head.

PAI is a vitality index which Xiaomi claims to calculate the heart rate data and transform it into "a personalized score that indicates the level of activity required to maintain good health." On paper, that sounds exciting, but in reality, using solely HR is far from enough to take care of your health. Although, if you decide to rely on the PAI index and follow it religiously, you might end up being more active than you would've expected. 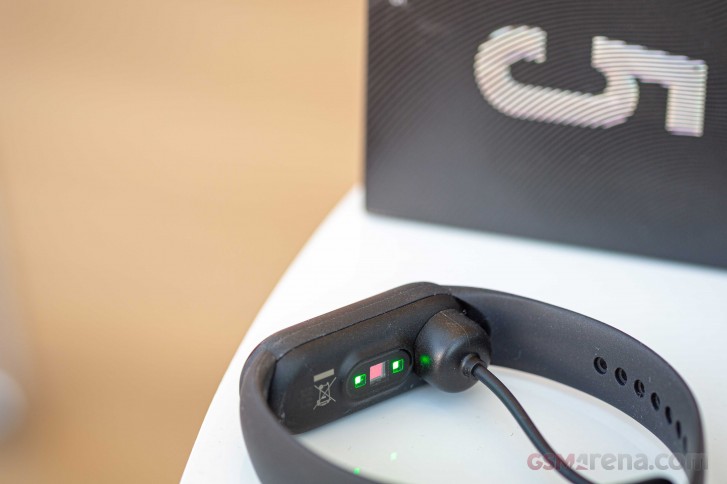 Xiaomi boasts about having 24-hour sleep tracking. It used to have sleep tracking in the Mi Band 4 as well, but now it calculates REM sleep (rapid eye movement or the time when you're dreaming). It also finally manages to track mid-day naps - it works the same way as calculating regular sleep along with REM, deep sleep, etc.

We decided to put the Mi Band 4 vs. the Mi Band 5 in real-life comparison, and the results are rather underwhelming. Despite multiple attempts in various scenarios, both bands couldn't agree on a single timeframe of going to sleep or calculating movement and tracking steps or average heart rate. The deep sleep & REM calculations were also desirable at best with the only constant being the time of waking up.

Having the bands not agreeing on a single important stat raises the question whether any of them is reliable at all. Still, we have provided a related answer to that question in the Conclusion section further down below. But before that we have to talk about another significant feature - the increased battery capacity.

The Mi Smart Band 5 grew in size, allowing for Xiaomi to cram a bigger cell, and now the battery is 125 mAh. While the capacity has increased, the tracking is also mightier, and the screen is bigger and brighter - in the end, it equals out.

Using notifications and raise-to-view and automatic heart rate tracking gets you about 10 days of battery life, but once the notifications are turned off and the raise-to-view feature is limited between certain hours of the day, the battery can get up to 12 to 14 days.

We had similar results with the Mi Smart Band 4 test last year, proving Xiaomi did an excellent job of not ruining the batter life. 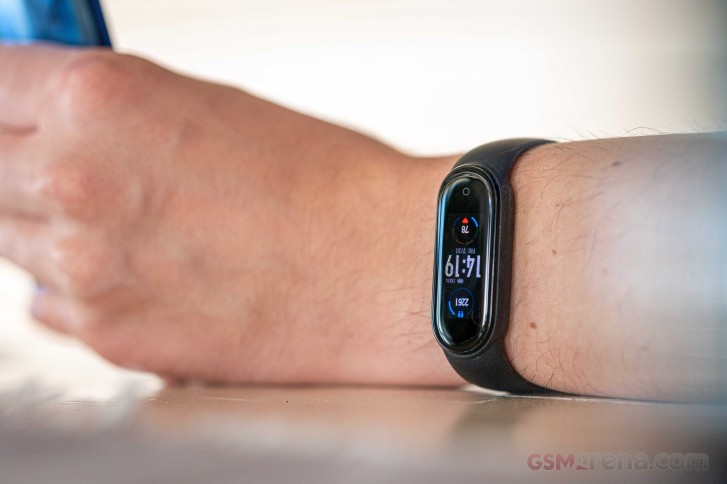 Since we used the Mi Band 5 with notifications, we realized it finally supports more than just the Latin alphabet - it will also display symbols in Japanese, Arabic, Thai, Indonesian, Vietnamese, Greek, and Cyrillic. However, not all of the languages and alphabets will be available out of the box, but the company has promised an OTA update sometime soon.

The Xiaomi Mi Smart Band 5 is pretty much for everyone. And while saying this, we want to point out that you shouldn't rely on a smart accessory to give you advice for a better life. Sleep tracking is a neat little feature, as well as heart rate or the stress meter, but they shouldn't be replacements for professional help if you have health issues.

This band is built around the idea of low pricing, straightforward features, and simple design without being too stuffy. Accompanied by the Mi Fit app, it gets the job done to track some of the stuff that happens throughout the day, but that's about it. Any additional info, detailed GPS tracking, extra-long battery or ability to talk during a call, and we're stepping into a different price category. 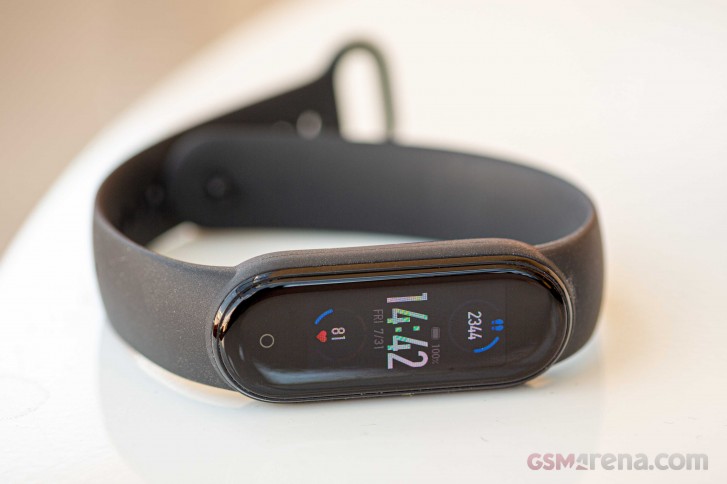 Xiaomi is offering the Mi Smart Band 5 for €39.99 in Europe, although countries like Indonesia and China have it better where the price is closer to €25. It is a worthy upgrade from the Mi Smart Band 4 and is a device to have - it brings the same battery life with even more features.

Xiaomi Mi Band 5 to sell as Mi Smart Band 5 outside China, NFC nowhere to be seen

can i use it without pairing to any phone? kindly help me on this matter…guidance much appreciated

I'd like to know whether it's display has a protective scratch resistant glass.