After getting a couple of certifications, including one from FCC, Xioami's upcoming Poco F4 handset has now hit Geekbench.

The scoresheet lends credence to rumors that the Poco F4 will be a rebadged Redmi K40S that launched in China a couple of days ago. That's because the phone is running the Snapdragon 870 SoC and the company has a history of renaming its Chinese phones for the global market. 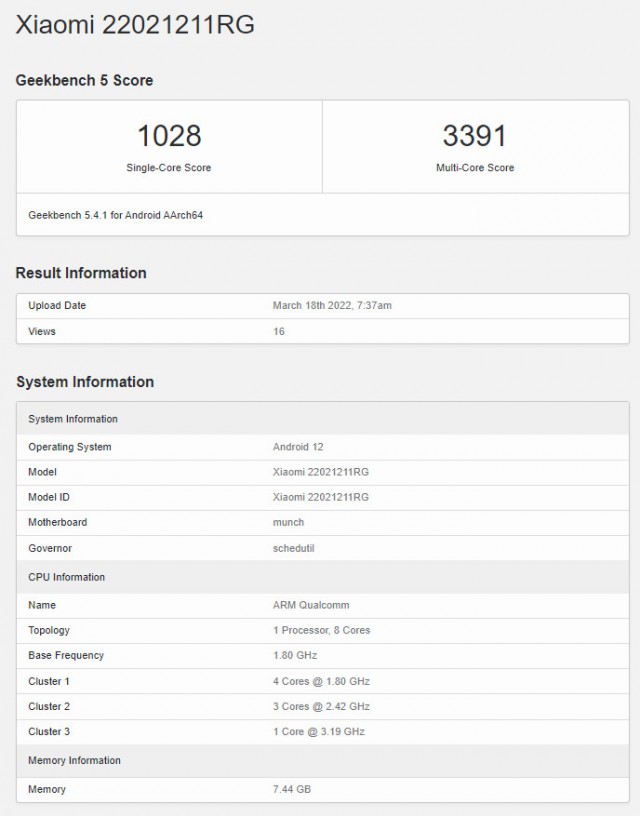 Screenshot from the Geekbench listing

The listing also shows 8GB of RAM and Android 12. The single-core and multi-core results are also in line with other Snapdragon 870-powered handsets.

Poco F4 GT bags a bunch of certifications, will have 4,560 mAh battery

Our Poco M4 Pro key features video is out

I see it like this... it's a Poco F3, at the same price, but with OIS and a more aesthetic redesign. I hope I'm not wrong and that Xiaomi doesn't ruin this, I just see it as a little refresh off what was the best sub 500$ phone on the ...

The poco f3 was not really worth it in some markets, for some reason it arrived too expensive and it was more with it to just get the mi 10t pro. If they are releasing the f4 at the same price with a snapdragons 870 I'm not too sure where thi...

Even Apple reduce their old soc phone. But with Poco 870 over and over... And you still want them to charge more? SD870 manufacturing cost should be lower than 2020, keep same selling price is already bad enough, if no OIS then why should ...