Just like its more expensive sibling, the vanilla Redmi Note 10 boasts an IP53 certification against water and dust. And it's one of the few Redmi's to have it too. However, don't expect the phone to be fine if you submerge it into water. The IP53 certification ensures against splashes and rain, for example. 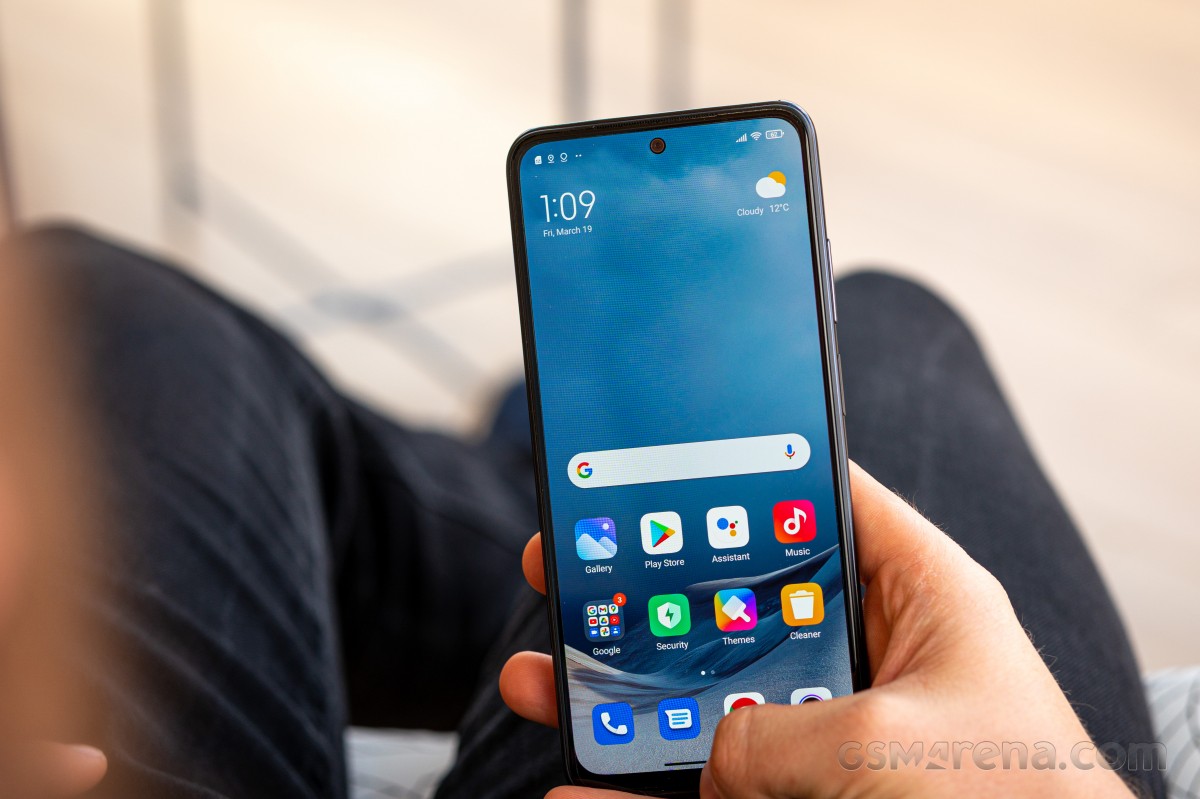 But unlike the Pro, this one has Gorilla Glass 3 for its front, instead of Gorilla Glass 5, and the back is made of plastic, not GG5 again. The frame is also plastic, but there's nothing wrong with that. The handset still feels pretty good in the hand - it's thin (8.3mm) and light (178g) mainly because of its almost all-plastic build. It kind of feels less slippery too. Sadly, the Onyx Gray color we received is a huge fingerprint magnet, and you can easily see the smudges. 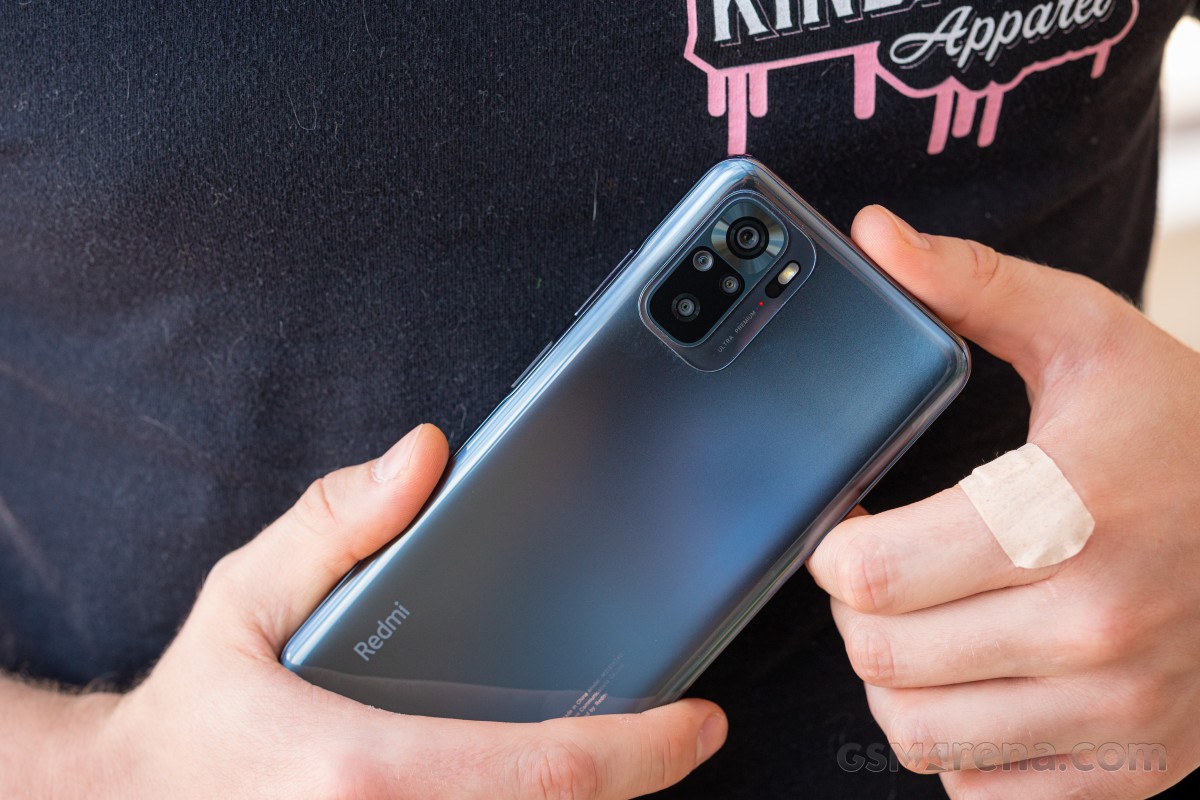 As we are still on the back, we can't miss mentioning the rather minimal protrusion of the camera module. Even when placed on a flat surface, it refuses to wobble like most. We find the camera design to be pretty nice, too, and it doesn't seem to be bothering us with asymmetry. Anbdditionally, the side panel edges are a bit more curved than usual and make the handset feel slimmer while improving the overall grip. 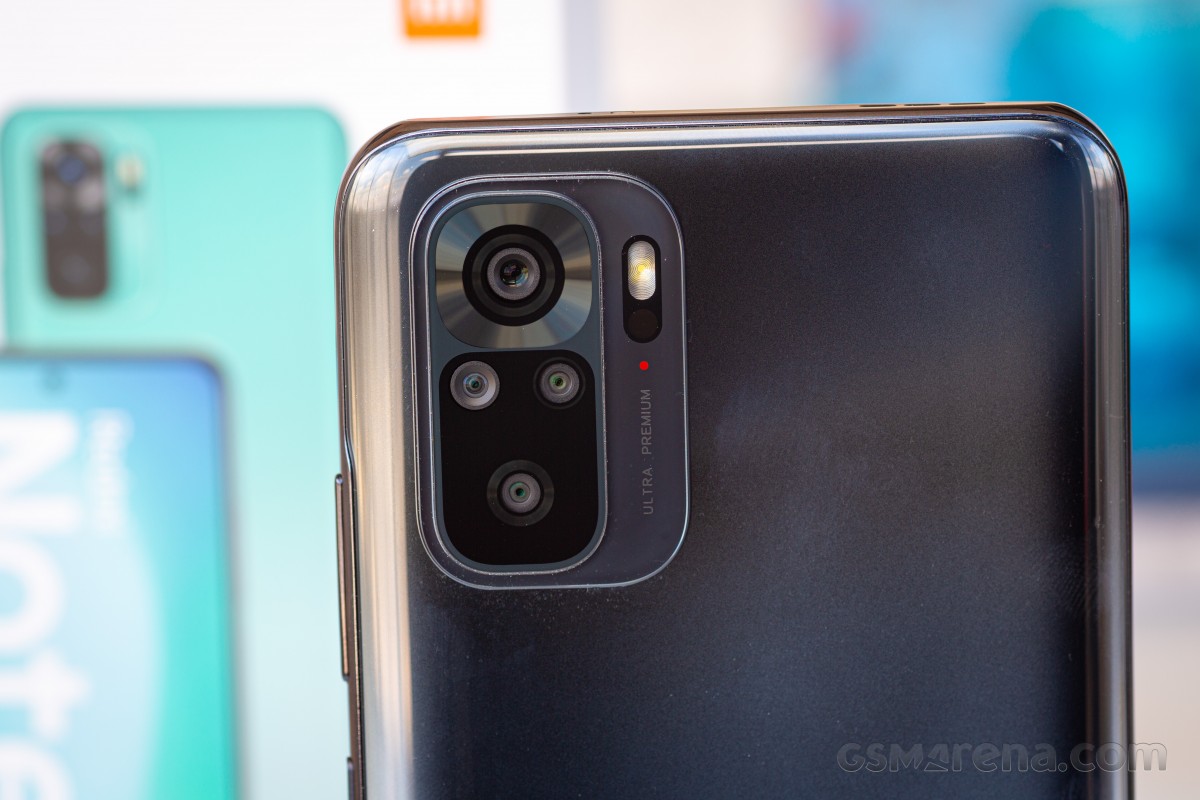 Flipping the phone reveals decently-sized bezels all-around, with the bottom one being slightly thicker, which is to be expected. The side frame and the top bezel seem roughly symmetrical in size. The punch-hole in the middle is minimal, mainly due to the use of an OLED panel. It allows for a smaller hole for the front-facing camera, and we can definitely say it's unobtrusive and doesn't eat away too much screen real-estate. 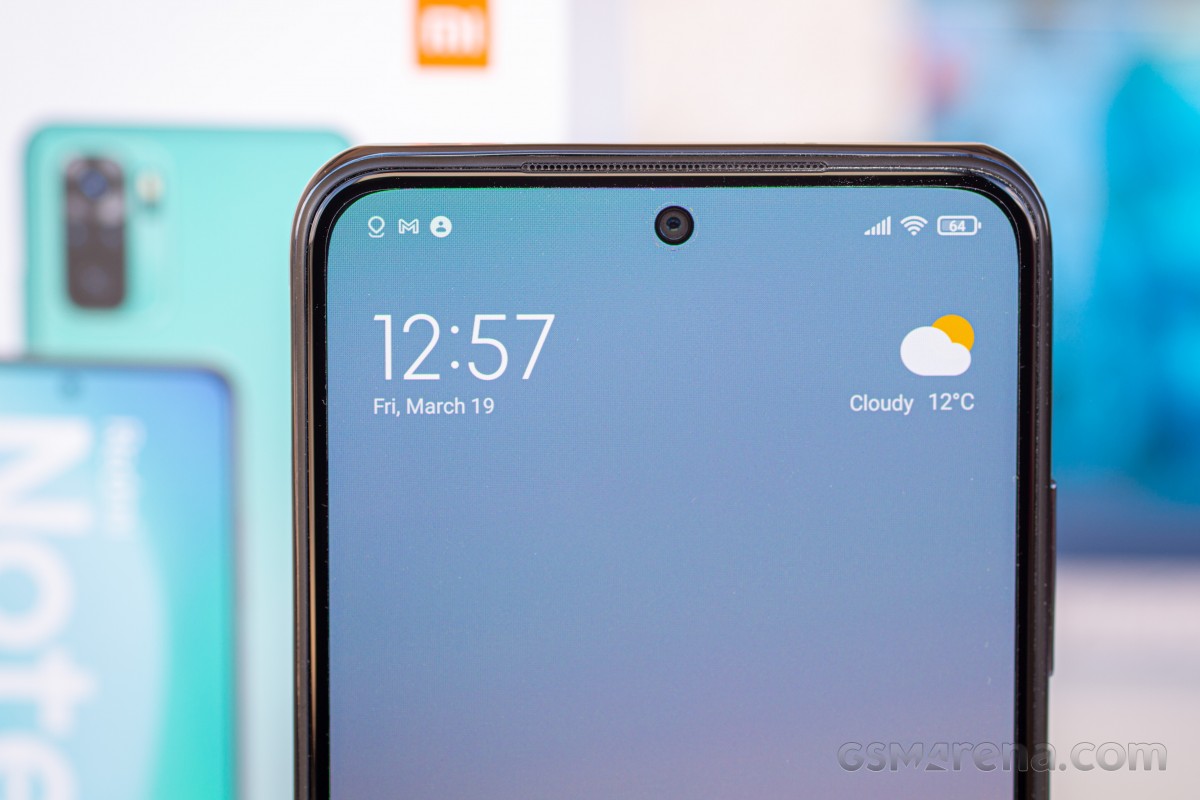 The sides are where things start to get interesting. The frame is so thin that it has been widened to accommodate the power key and the volume rocker.

Both seem to be a bit bigger than you'd expect, and the unusual part is that the power button, which doubles as a fingerprint reader, isn't indented as you'd normally expect from a phone with a side-mounted fingerprint scanner. It's actually slightly protruding, and we have some mixed feelings about it. On one hand, it doesn't change the overall usability, but on the other, there's no clear tactile feedback that you've placed your finger on it. Luckily, the button's actual placement is ideal, so when you stretch your thumb, it naturally falls on the button. 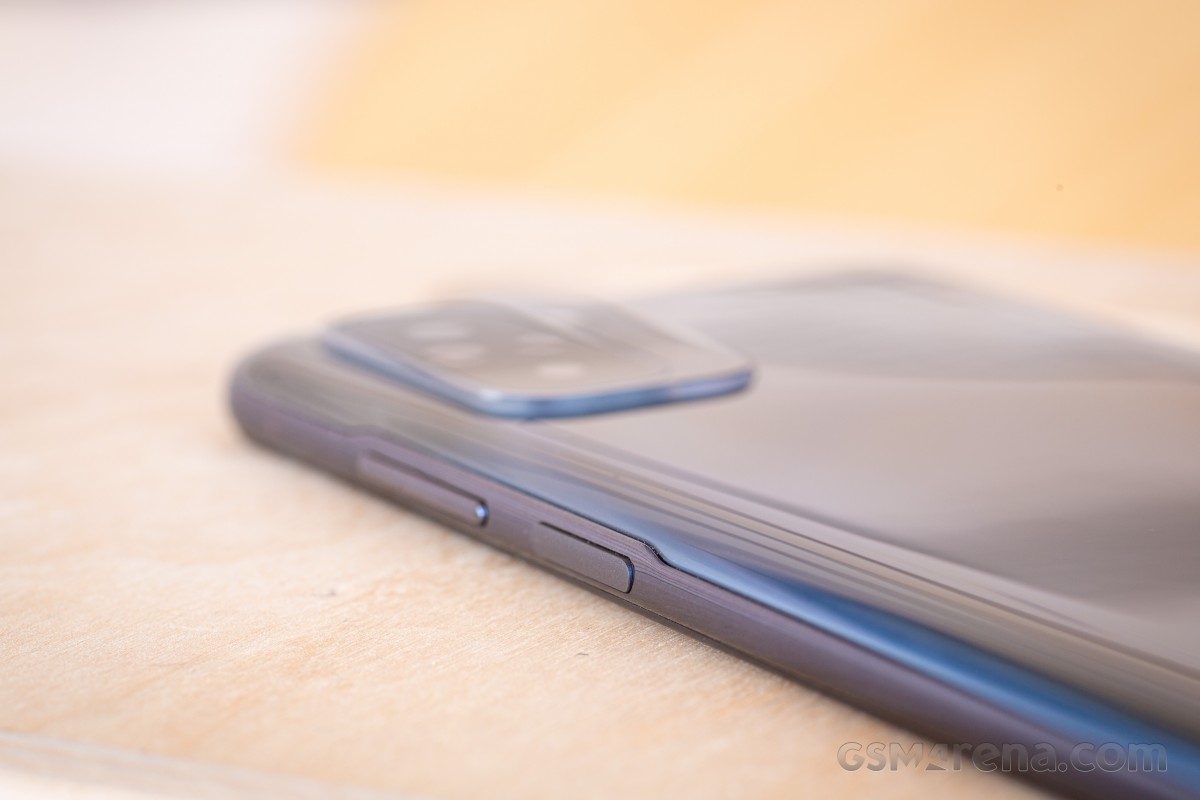 The bottom and top ends of the frame are flat and adopt a matte finish instead of the glossy one for the rest of the frame. It gives the phone a distinct look. There's the 3.5mm jack, the USB-C connector and the bottom-firing loudspeaker with its rather unusual design.

The top is where the IR blaster is placed along with the secondary loudspeaker. This leaves the left side with the Dual SIM tray. This one has a dedicated slot for a microSD card as well. 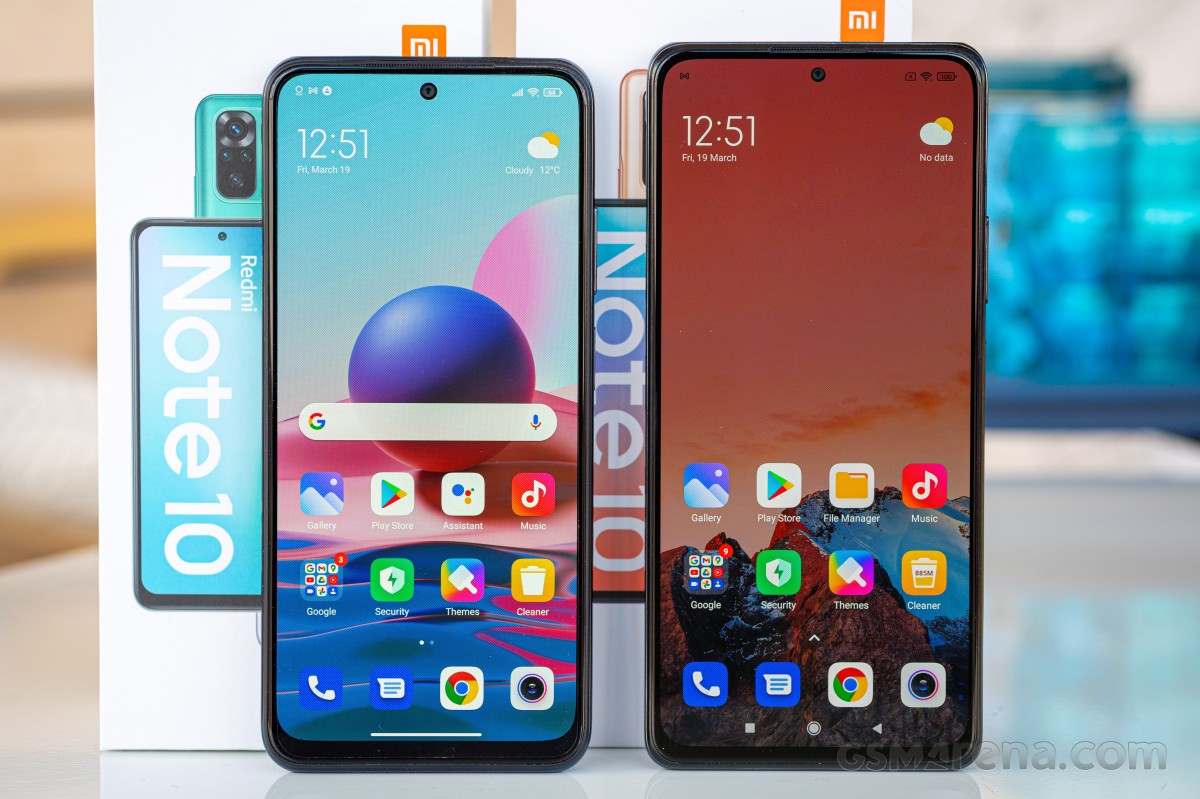 And to how it compares to the Redmi Note 10 Pro, that's an easy answer. It does feel quite similar but with a few notable details. For once, the vanilla Note 10 feels considerably more compact and lighter. Since the back is made of plastic, it's a bit less slippery. That doesn't mean we didn't like the Pro's handling, quite the opposite. But physics and dimensions are hard to deny. 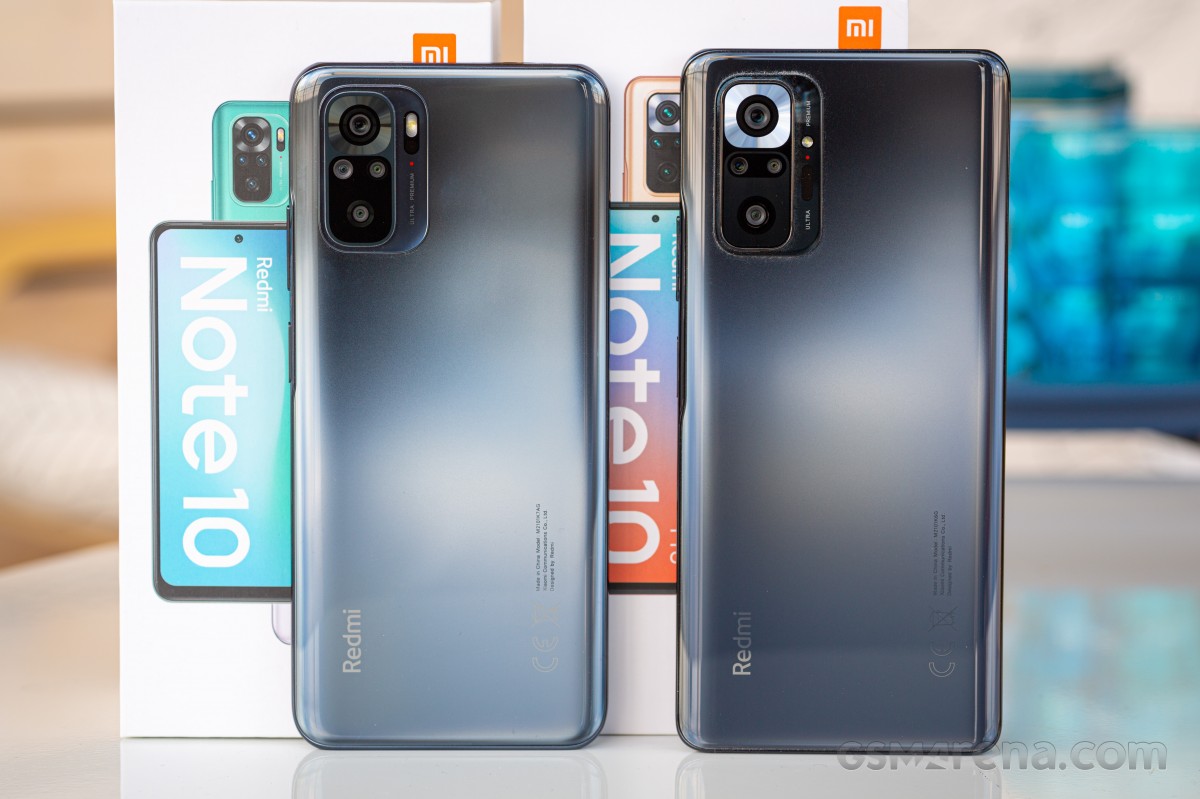 It would be nice to include a Call Quality or microphone test. I hope you read it but it looks like you don't

the most expensive cloud storage, shame on them i miss my huawei p 20pro and trust me the camera is way way better i feel likeim going back in time i should get ny self a memory card cos i don't have 40 dollars for 3 months of cloud storage