Xiaomi's Redmi introduced the Note 11T 5G last November in India, which is available in China as the Redmi Note 11. Today, the company announced it will unveil the Redmi Note 11T Pro later this month in China, and it could be joined by a vanilla model different from the Indian version. 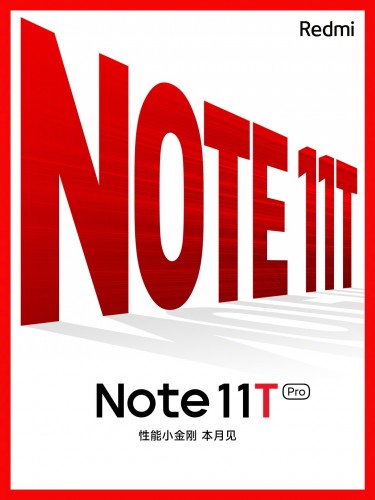 Redmi hasn't divulged any specs of the Note 11T Pro yet, but the company said the smartphone will have "turbo-level performance in all aspects."

Moreover, Redmi GM, Mr. Lu Weibing, revealed that the Note 11T Pro is an upgraded version of the Redmi Note 10 Pro, which is powered by the Dimensity 1100 SoC in China.

We'll learn more about the Note 11T Pro once Redmi properly kicks off its promo campaign and starts teasing the smartphone's features.

Editorial: How Many Redmi Note 11s are too many?

Am already exhausted of the 11 series

Maybe there will be like 1100 note 11s to come lol coz this is xiaomeme.