Xiaomi Redmi Note 3 comes in a compact paper box, but unlike many other Mi phones, it's mostly white. The box isn't made of recycled paper as the previous ones, but comes with a reduced size.

The retail package of Redmi Note 3

Inside we found a regular 2A wall plug, a microUSB cable, and some paper work. As usual - Xiaomi leaves the choice of headphones up to you.

Xiaomi kept the looks of the Redmi Note 2 for the new Redmi Note 3, but replaced the matte plastic with aluminum. The hardware upgrades are clearly visible, too, you can spot the dual-LED flash and the fingerprint scanner at the back.

The Redmi Note 3 indeed boosts the looks with its brand new shiny metal armor and it sure feels more metallic than the material Meizu used for the m1 metal. The premium material is a rarity among the mid-rangers and we sure are happy Xiaomi did choose it for a Redmi Note piece.

As usual the front is covered by an entire piece of black glass. The signature red accent on the capacitive keys is gone for good. Instead Xiaomi left those invisible blending into the black glass until they come alive with white backlighting.

The fingerprint sensor is placed just below the main camera, where your index finger rests perfectly. It's of the always on kind and will unlock the screen upon touching it. We really like this approach and hopefully we'll see more phones utilizing it. 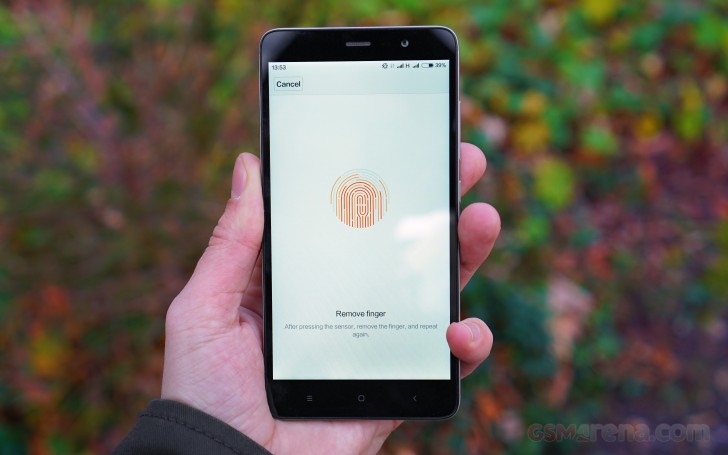 Finally, we should mention the two plastic bands at the back's top and bottom. They are inevitable as they cover the phone's antennas (metal would have obstructed the signal), but on a positive note Xiaomi made them very well, styled with the same silver paint as the rest of the body, so you can barely spot them.

The metal on the Redmi Note 3 provides for a good handling, but not as great as on the matte Redmi Note 2. Opting for metal instead of matte plastic may have made the phone more slippery, but it boosted its looks by a mile. And we are okay with that.

Little has changed since the Note 2 - the Note 3 introduces a pretty much identical control set. Above the screen is the earpiece flanked by a couple of sensors and the selfie camera. Below the 5.5" display is the capacitive Android trio, and you can assign those keys additional quick actions at double tap and tap&hold.

What's above the screen • the three Android keys below the display

The left of the Redmi Note 3 accommodates the ejectable SIM tray. You can put two microSIM cards inside, but there is no option for a microSD expansion. The volume rocker and power/lock key are on the right.

The Redmi Note 3 places the audio jack, the IR blaster, and the secondary microphone on top. The microUSB port and the primary mic are over at the bottom.

Finally, the back is where most of the upgrades reside - the metal cover, the dual-LED flash next to the old 13MP snapper, and the new fingerprint scanner. The loudspeaker grille is also around, close to the bottom antenna band.

The back of the Redmi Note 3

I had note 2 so when note 3 released i purchased but within a month realise what mistake had done. It's no longer the same as it was. Continue hang, slow down, heated up. Same things happen with my friend's too. Xiaomi lost It's charm as it was. V...