The Xiaomi Redmi Note 3 comes in plain box that holds a 2A charging adapter, a microUSB cable and some user guides. Traditionally for Xiaomi, there are no headphones included.

The Snapdragon version of the Redmi Note 3 has exactly the same size and design as the MediaTek-powered original. Xiaomi didn't have to change the phone's thickness to fit the new 16MP sensor and the phone measures the identical 150 x 75 x 8.7mm. The weight is the same as well at 164g.

The Redmi Note 3's exterior for the Snapdragon version repeats the original. The design can even be traced back to the Redmi Note 2, except that plastic has been replaced by aluminum. The fit and finish is quite good and the phone feels durable.

A metal-clad unibody is a cool thing to have on a mid-range handset and we are certainly happy Xiaomi chose it for the Redmi Note 3.

As usual, the front is covered by an entire piece of black glass. The signature red accent on the capacitive keys is gone and instead Xiaomi made them invisible blending into the black glass until they come alive with white backlighting.

The fingerprint sensor is placed just below the main camera at the rear, where your index finger falls naturally. It's the always-on kind and will unlock the screen upon a touch. 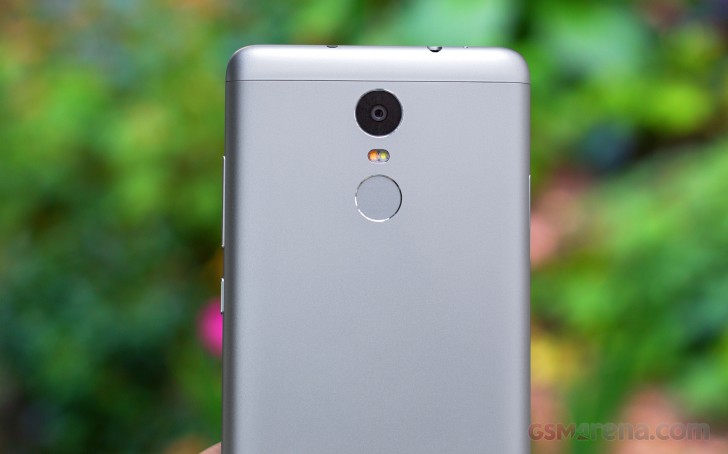 Two plastic strips at the back top and bottom make sure the phone's antennas work, but on a positive note Xiaomi made them very well, covered with the same silver paint as the rest of the body, so you can barely spot them.

The plastic bands are impossible to escape in a metal phone

The metal finish of the Redmi Note 3 allows good enough handling, but not as great as on the matte Redmi Note 2. Opting for metal instead of matte plastic may have made the phone more slippery, but it boosted its looks by a mile, so we'd call it a smart compromise.

Little about the control set has changed since the Redmi Note 2. Above the screen is the earpiece flanked by a couple of sensors and the selfie camera. Below the 5.5" display is the capacitive Android trio, and you can assign those keys additional quick actions at double tap and tap-and-hold.

What's above the screen • the three Android keys below the display

The left of the Redmi Note 3 accommodates the ejectable SIM tray. You can either use two microSIM cards or opt for a microSD card - it takes the second SIM card slot. The volume rocker and power/lock key are on the right.

The Redmi Note 3 has the audio jack, the IR blaster, and the secondary microphone on top. The microUSB port and the primary mic are over at the bottom.

Finally, around the metal cover, the dual-LED flash sits next to the new 16MP snapper and the fingerprint scanner. The loudspeaker grille is also around, close to the bottom antenna strip.

The back of the Redmi Note 3

how can u know if it is fake

Completed 3 years! Now "NO VoLTE" support for either Airtel or Vodafone