Just days after confirming that 30 devices will get the latest Xiaomi MIUI 9.5 user interface, the company has started seeding it to the popular Redmi Note 4. According to a screenshot we received in our mailbox, the update brings many bug fixes and minor design changes. 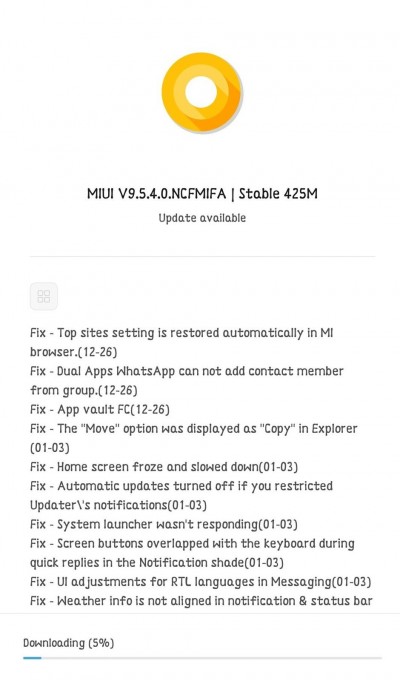 Arriving as MIUI V9.5.4.0.NCFMIFA and weighing 425 MB in size, the update fixes bugs that appeared in various apps and the system launcher. The patch should also bring the latest security update.

If you haven’t received the Global ROM yet or you turned off automatic updates, head to the Settings menu to check out if the update has arrived to your device.

Thanks, Ashish Saraf, for sending this in!

MIUI 9.5 to hit over 30 Xiaomi smartphones

At last!! They have been fixed that danm screen black stopped working thing!!! Now im so happy hahaha!! ;-)

You know, Xiaomi wants to imitate Apple, and if iOS is still buggy after half a year, so is MIUI.