Xiaomi hasn't altered the Redmi build formula in any significant way for quite some time now. Just like its siblings, the Redmi Note 5 AI Dual Camera offers a nice blend of metal, where it matters and plastic, where functionally beneficial.

The entire frame and the back plate of the device are metal and consequently very rigid. There is no flex or give anywhere. And even though the different segments of the outer body are clearly distinguishable, the handset feels as solid as a brick overall.

The only potential source of concern in the bill of materials is the unspecified Gorilla Glass version, covering the display. However, Xiaomi has a pretty good track record in this department, and if past Redmi devices are anything to go by, it should be a non-issue.

The budget smartphone battle has always been a cutthroat one, especially in recent months, as more and more hardware features continue to trickle down from the mid-range segment to affordable models. Take FullHD+ panels, for instance. Since the Xiaomi Redmi Note 5 (Redmi 5 Plus) has one at EUR 120, or so, it is only logical that the much more premium Redmi Note 5 AI Dual Camera has one as well. Sadly, that logic doesn't seem to be universal. But more on that in the video capture section. 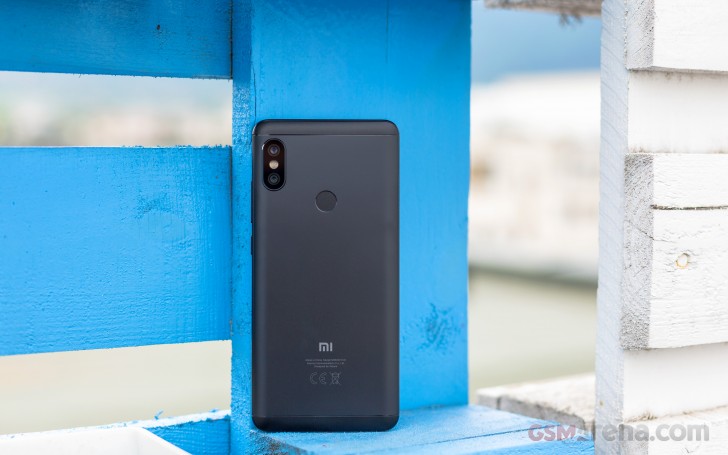 The 1080 x 2160 pixel panel of choice for the Redmi Note 5 AI Dual Camera seems to be identical to that inside the Redmi Note 5 (Redmi 5 Plus) and the Redmi Note 5 Pro. At least on paper, that is. This is likely a good cost-saving measure, overall, since Xiaomi only has to source the hardware once. Plus, despite the price variance between said devices, you still end up with a large 5.99-inch display. It is short on notches and curves, which is probably a good thing, to be honest. The panel still looks modern, though, thanks to its rounded corners and 18:9 aspect ratio.

A Gorilla Glass protective finish also seems to come standard within Xiaomi's Redmi lineup. Beyond that, the front side of the phone looks deceptively empty. Despite the clean appearance, the top chin still houses a dedicated LED for the selfie camera and a notification LED, as well as all the other usual sensors and the earpiece.

Flipping the phone around reveals a bit more details about its construction. A close inspection seems to reveal the top and bottom segments of the body are independent and meant to slide out in opposite directions, from the rest of the frame. For radio pass-through reasons, we can only assume that the backport of these is made of plastic, while the middle "frame" part feels like metal.

The actual back plate of the Redmi Note 5 AI Dual Camera follows the same shape, but unlike the top and bottom parts, seems to be molded from a single metal piece, along with the sides of the phone. The same shade in the finish seems to back this theory up. So, to sum up: metal back and frame, with small plastic bits in the top and bottom segment, around back.

Regarding controls, the layout is pretty standard - no keys on the front, just on-screen navigation. On the back - a round fingerprint reader. Reliable and accurate, but no speed champion - just like any other Redmi in recent memory.

The only three actual buttons the Redmi Note 5 AI Dual Camera has are on the right-hand side. These are nice and "click"-y, well defined and conveniently placed. On the opposite side - a single card slot sits very flush with the rest of the frame. It's a hybrid affair, meaning you have to choose between a second nano-SIM card, or a microSD one. A three-slot tray would have earned Xiaomi some extra points here.

The bottom side of the Redmi Note 5 AI Dual Camera is pretty busy. In no particular order, it houses the familiar 3.5mm audio jack, as well as an equally familiar, but a bit less universally beloved microUSB port. It is stuck on USB 2.0 transfer speeds, but it does have OTG support. Also on this side of the phone - the single, bottom-firing speaker and the main microphone. The latter sits behind a fairly large hole and seems a bit too exposed. Poking in there thus seems ill-advised.

The top side of the handset also has a mic hole - one significantly smaller in diameter, but still wide enough for a SIM ejector tool to fit through. Right next to it - an IR blaster. It's a small thing, but for the right user it can potentially make a huge difference so props to Xiaomi for not shaving it off to save a buck.

No service for 2 or 3 years old models and their reply is older model no parts available. Be careful while purchasing old models.

Does it support HDMi

It's support 3.0 quick charge, Fast Charging text will be see while using 3.0 charger.