This reviewer has been nostalgic for the old dumbphones of various shapes, but today everything is all about the screen, and it usually comes wrapped in glass. And so is the Redmi Note 9S - a Gorilla Glass phone - built around a large screen - and featuring all the trendy curves and flashy paintjobs. 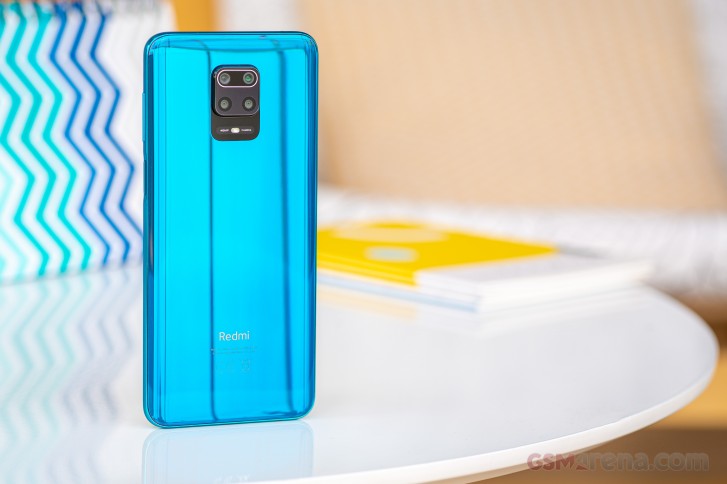 There were times when we were able to recognize a Redmi phone at an instant - by looking at its Android touch keys below the screen. But there is no space for such remnants of the past anymore - the Redmi Note 9S packs one big 6.67" IPS LCD screen of 1080p resolution surrounded by rather thin bezels. 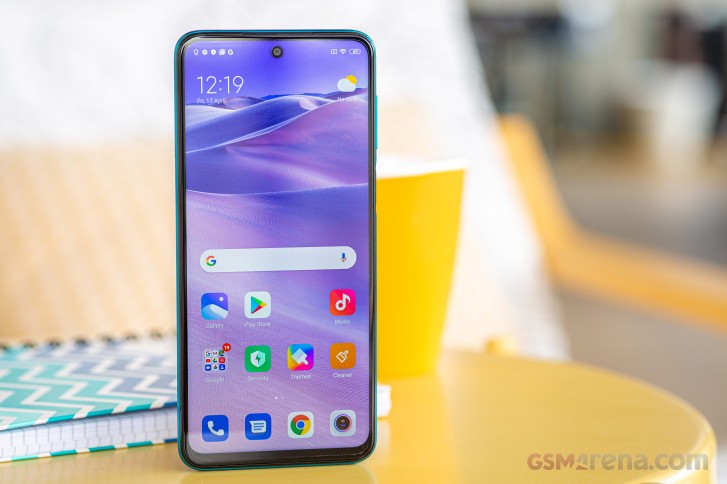 The new display has a punch hole for the 16MP selfies snapper. With this new type of notches, the makers are sacrificing the bare minimum of pixels, and we are happy with this development since the Note 8T. It is not ideal, but it is an improvement. 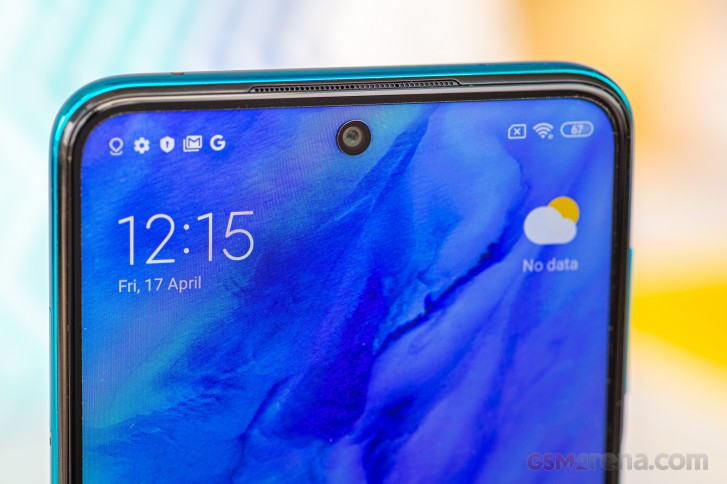 The earpiece grille is almost invisible above the screen, but contains more than you think - there is also one super tiny white notificaiton LED inside.

Not having an OLED screen makes it nearly impossible for the companies to put the fingerprint scanner under the screen, and that's why it is on the right side of the Redmi Note 9S - that's another recent trend. The surface of the power key is touch-sensitive, and the button also doubles as a fingerprint reader. It is fast and accurate, and we have no complaints. 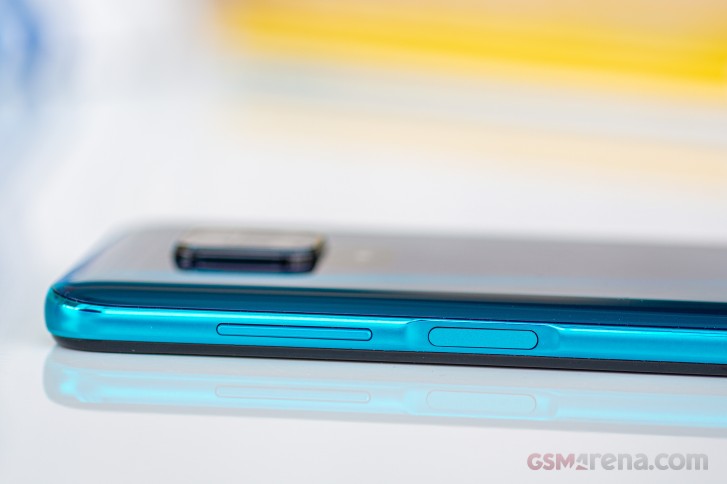 Moving on to the back of the Note 9S, we are dazzled by the Aurora Blue color on the curved Gorilla Glass 5. Even though we've seen a couple of Aurora Blues on other phones already, this type of paintjob still makes us somewhat dreamy, and we took a break and just looked at the back for a while. 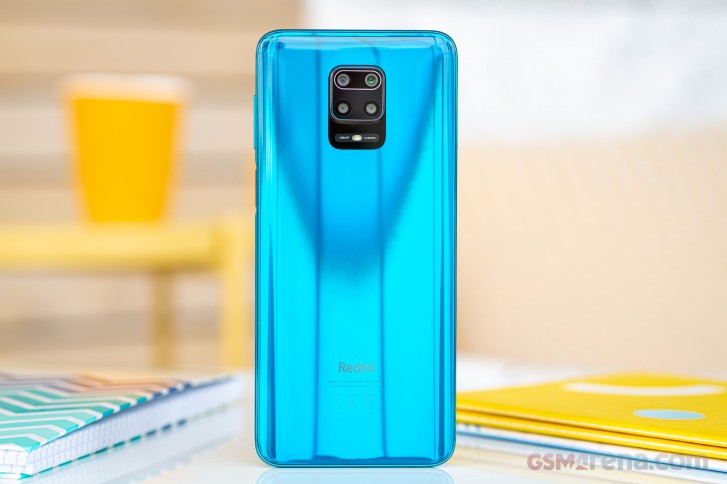 The quad-camera is on the back, and it resides within a small but humping sharp square. Here are the 48MP primary, the 8MP ultrawide, the 5MP macro, and the 2MP depth snappers. The black accent paint goes beyond the camera square downwards towards the LED flash. 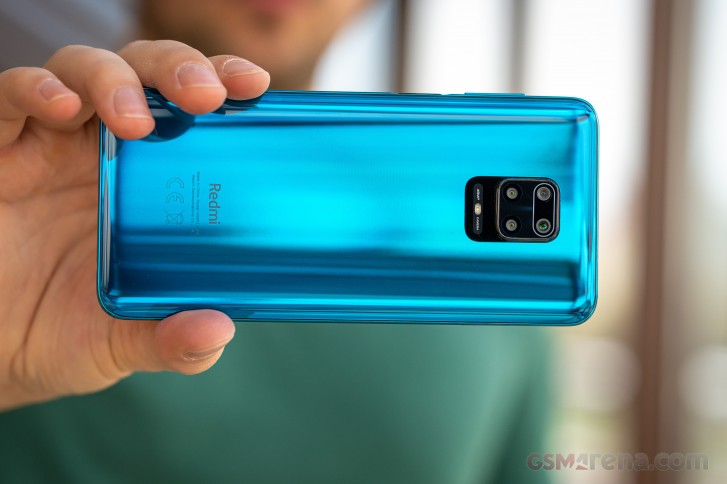 Thanks to the centered camera hump, the phone does wobble on a desk, but not as many of the other phones on the market. The Redmi Note 9S wobbles only when you are tapping, using some force at that, around the top part of its screen - something that happens quire rare.

The blue frame is made of plastic and has matte finish unless we count the insignificant polished chamfers. It makes for enough grip, and we felt the Note 9S safe most of the time. Sure, its back is as slippery as it can get, but the frame does a particularly good job balancing that. 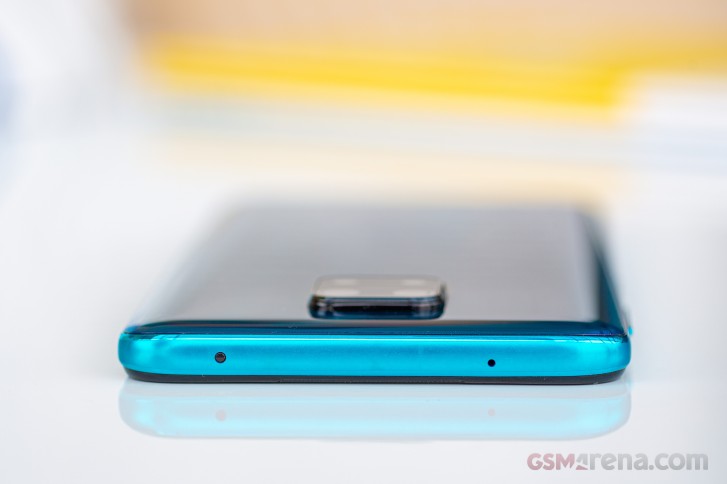 Of course, if you are not okay with the grip, you can always use the case that's within the retail box. 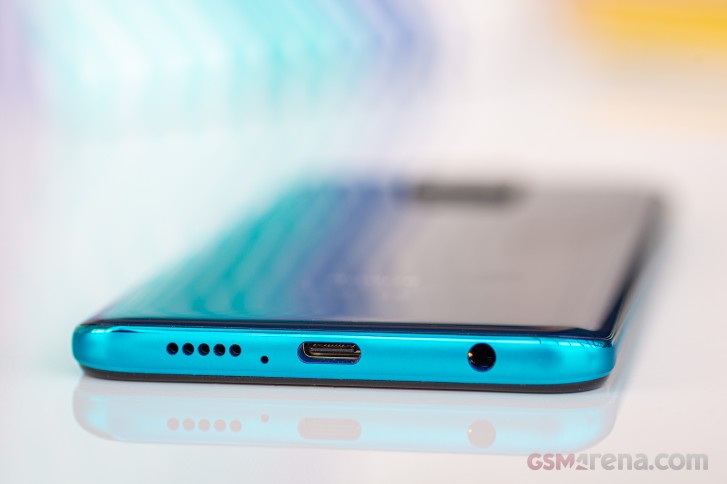 The Redmi Note 9S has a lot of nearly extinct features around its sides - an IR blaster on the top, a microSD slot on the left, an audio jack at the bottom.

The Redmi Note 9S is a large phone, and operating it with one hand is not a breeze experience. But that's why it is called a Note in the first place - it is supposed to have a big screen, and expected to pack a huge battery, and if the size bothers you - then you are looking at the wrong phone. 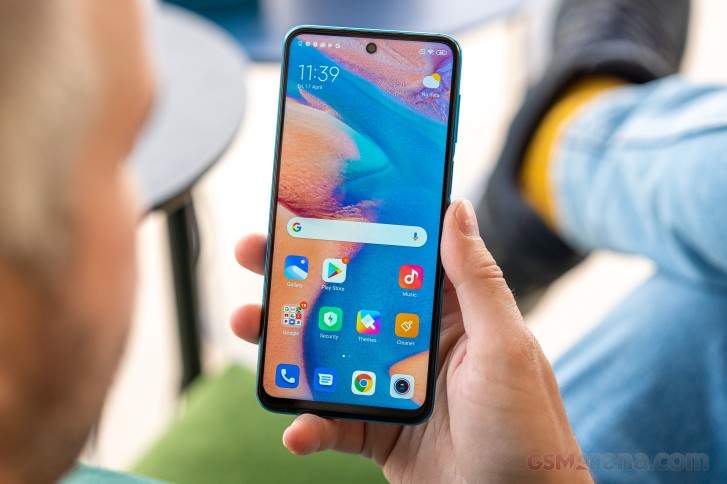 The Note 9S is splash-proof thanks to P2i nano-coating technology, so it will survive the rain and some light splashes. It is not waterproof though, so be careful.

We liked the Redmi Note 9S beautiful design and sleek shape, and we have positive thoughts after using it for a while. It is a well-build phone, eye-catchy, with enough grip, and basic water protection. That's plenty enough.

I love Redmi note 9 series because I can't afford samsung galaxy s20 ultra. For me Redmi note 9s was a great phone 💖💖💖💟, but the xiaomi manufacturer should make the price higher in order for this phone to have stainless body frame and amoled 108...

Oh, now you call yourself Muz? At other article you called yourself John. Both Muz and John been spreading stories with unknown authenticity though.