ZTE A2017 visits AnTuTu as well, could be the next Axon model 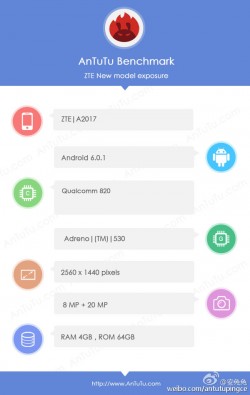 The Huawei P9 and iPhone SE aren't the only smartphones that have been revealed to have been put through the paces of the AnTuTu benchmark today. The ZTE A2017 joins them, and this might just be the Chinese company's next Axon-branded handset.

Earlier this month the A2017 was spotted in the GFXBench database sporting a Qualcomm Snapdragon 820 chipset and 4GB of RAM. Now those specs have been confirmed by AnTuTu's info screen, along with other hardware details.

The phone has managed to score an impressive 140,086 points in AnTuTu, which is more than the Xiaomi Mi 5 and the Samsung Galaxy S7. That's quite impressive, so ZTE's next flagship device will definitely be no slouch.

All I'm saying is, it had better have that 32 bit DAC from the last model or an even more refined one. If it doesn't then I'll just buy an LG G5/V10 or the Axon Elite Mk1.

Exynos fanboys. What was it that you said about the resolution? 130k plus scores are definitely from FHD?