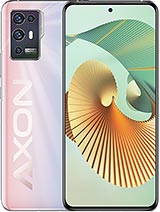 so better to stick

MA, 15 Apr 2021This phone is a big disappointment...No stereo speakers...N... moreJust don't buy it, simple! It's not a disappointment to others.

i miss the curved screen.

Dennis.K, 08 May 2021You're right man, for 400 euros we should have 8k and ... morePeople on this platform are dumb tbh. They see a $500 phone and expect a Snapdragon 888 paired with a 108MP camera and some other useless crap. A phone is a phone.
Not to mention, the myriads of people who think that the SP865 is slow now with a "OLD" 7mn transistor.. I bet you're sitting with a 2018 midrange phone with a 15nm transistor and you're sitting here judging things you never experienced using.

No 8k , also the display just amoled and fullhd+ its was better if qhd+ also the battery , what is that zte come on

This phone is a big disappointment...No stereo speakers...No OIS for the main camera...and the selfie camera will not be enough for me at least!

Why the camera does not have a screen! Wasn't the second generation camera to be unveiled under the screen?
It seems that the camera under the screen will never mature because it is not a good solution at all!
Using a 21: 9 aspect ratio, like Sony phones, seems to be a better choice because it drastically reduces the margins of the phone.

What happened to the camera under the screen ?!
If the mobile phone does not have a selfie camera, I think it is still better than a selfie hole!