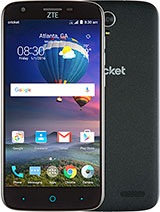 I still have this phone in 2020, keep repairing it myself via ebayy, it keeps working. Software is starting to fail. I hate to buy a new one, but going to have to soon

l have had this phone for the past one year and it works flawlessly, of course sd 210 can't work like sd 825 or 835 so don't expect much but very good in battery performance.

Anonymous, 26 May 2017the phone is decent but the camera sucks. my old android Samsung... moreCricket employees are not repair techs. Some of us do try to handle basic issues, but we are limited in what were allowed to do. Most tech issues, we have to refer cusotmers to either manufacturer tech support, or 1-800-cricket.

I've had mine for over a year and its been good. For what I paid and the hardware its a good phone. I haven't had any issues software wise and still have the original charger that came with it plus various after market brands I've collected over the time.

DO NOT buy this phone. I repeat, DO NOT buy this phone. The only thing good about this phone is the battery. It keeps restarting by itself, keep freezing like 20 times a day. Unless you're going to use it as a media player (music and bad quality video), save some money and buy you a real phone. Cricket almost got me dead of anger on a daily basis.

Anonymous, 13 Jun 2017This phone sucks. It takes adleast 3 days for the phone to ful... morebecasue cricket is a cell company not a repair or manufacturer. THey have a 7 day return policy on all phone and anything after is manufacturer. I will say i have had similar problems with a grand x 3 charging, and i needed a new cord.

This phone sucks. It takes adleast 3 days for the phone to fully charge. It is in possible to download pictures. Cricket and the phone is horrible. Do not waste your money on this phone. You would do better buying a used phone. When I in formed cricket that the phone does not charge properly cricket did norhing

the phone is decent but the camera sucks. my old android Samsung galaxy was better! Also, how do these people at Cricket keep their jobs, hardly any of them know anything, unbelievable. I went in yesterday to ask about 5 different issues and for 4 of them the guy said "I don't know", wtf

phone work well but cricket service is real bad ,phone work in store but went two blocks and no service , they tole me phone is ok but it lacks service in all areas! ok phone ! cricket sucks!

Anonymous, 01 Jul 2016Garbage! After only two months of having this phone the screen i... moreit is an android; "wake up!"

AnonD-624281, 24 Dec 2016I have the same problem as many with this phone. now both me and... moreKicks me offline every 5mins,and turns itself off by itself. Says battery at 100% then turn power on and at 20%. Then turns itself off again...Very disappointed and taking back tomorrow

The Grand X 3 for cheap phone has performed well so far.Its feature rich I would like to get one for my Mrs but she just got a brand new Samsung

I have the same problem as many with this phone. now both me and my sons chargers don't work. it won't hold a charge. WTF anyone else with this problem? I love the phone but too many issues and I have cleared cache on FB, still won't play unless I keep trying to replay. It also won't send anything to my sd card, I have a 16gb and have tried 32gb cards and my phone is full. I downloaded app to do transfer and now both are full Did not have this problem with Samsung. I go to Samsung today!

The phone Is Great and works fine only in the cricket store .when i got home it had no yes no service no service at all and i only lime 3 yes Three Block away the CRICKET service suckis!!!!!!!!!!!!!!!

The Gorilla Glass sucks one drop on the ground and a glass completely shattered Great phone! But the gorilla glass is not what they cracked it up to be.

AnonD-530054, 25 Apr 2016I just got this phone yesterday and I can change it to 100% but ... moreIt could just be an app draining the phone.
At my school, we rely on our phones to complete some assignments so I end up using my phone quite a bit throughout the day. With moderate use, I'll come home with the battery at 75%.

zaytoven what are you talking about

best phone I've ever had. i don't consider this phone as an android i love it