Earlier this year, ZTE released the MAX XL, a 6” smartphone on a budget. That is more of a carrier phone, however, and its camera can’t shoot 2160p video. What if that could change? 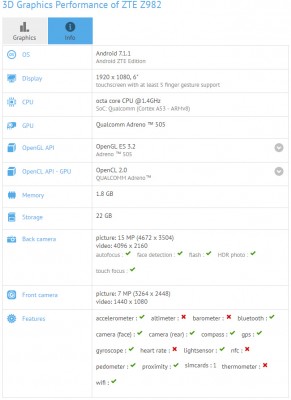 The Max XL sells for just under $200, the ZTE Z982 should be a bit pricier but not by much. Of course, that’s not something that GFXBench can detect. Also note that a while back we heard about a similar phone – the Z986, which should have the more capable Snapdragon 625 chipset (making it similar to another 6-incher, the Axon 7 Max).

It's the ZTE Blade Z Max for MetroPCS. It's has a dual camera set up on back. 16mp and 2mp like the iPhone 7 Plus