The Realme 9 series kicked off with the 9i, a 4G only mid-ranger. After that came two Pro models (both with 5G), then the Realme 9 5G and 9 5G Speed. Several leaks indicate that this will be followed by with second 4G model, though one more capable than the 9i.

First off, the Realme 9 (4G) temporarily appeared in the list of devices on a realme.com support page. That has now been scrubbed, but not before it caught the eye of leakster Yogesh Brar and MySmartPrice. 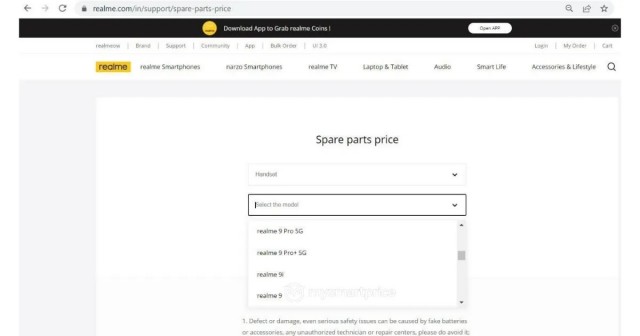 Realme 9 (4G) appears in list on the company's official site

Besides confirming the phone’s existence, Brar also revealed that the phone may have a 108 MP main camera. This could make it one of the more capable shooters in the 9-series. The current leader is the Realme 9 Pro+ with a 50 MP sensor (1/1.56”, 1.0 µm) and OIS.

Additionally, the Realme 9 (RMX3521) will reportedly offer a 16 MP selfie camera, which is on par with the rest of the series. Previous leaks suggest that the phone will arrive with two memory configurations (6/128 GB and 8/128 GB) and three colorways (Sunburst Gold, Meteor Black and Stargaze White).

We don’t know what chipset will be at the heart of the 4G phone (the 9i has a Snapdragon 680), but unconfirmed info suggests that it will be powered by a 5,000 mAh battery that supports 33W fast charging. This will match the Realme 9i and 9 5G battery setups.

Realme 9i is official with Snapdragon 680, big battery

Realme 9 SE launches with an SD778G and 144Hz display, Realme 9 tags along

it may be soon equipped Helio G96, 90Hz, and 108MP. worthly upgrade than realme 8, hope the price will be less than previous.

Yes it's stupid from Realme, 64 mpx cam is more than enough for the phone, a good cpu and display matters more than a commercial 108 mpx cam