Samsung's semiconductor division grew to the top of the Android realm over the course of only a few years, and there's little doubt that the Exynos 7420 is the reigning performance champ. The company appears to be working to diversify its SoC range and a new model has appeared in GeekBench listing.

The spotted chipset is reported as "universal8890", meaning it may be released as Exynos 8890, instead of the Exynos M1 designation that's been mentioned. The SoC features an octa-core processor, clocked at 1.38GHz, but its Processor ID is none of the familiar ones. The ARM implementer 83 is neither the known Exynos 7420 (ARM implementer 65), nor the purported Snapdragon 820 (AMR implementer 81). That suggests we may very well be looking at Samsung's own Mongoose cores here. 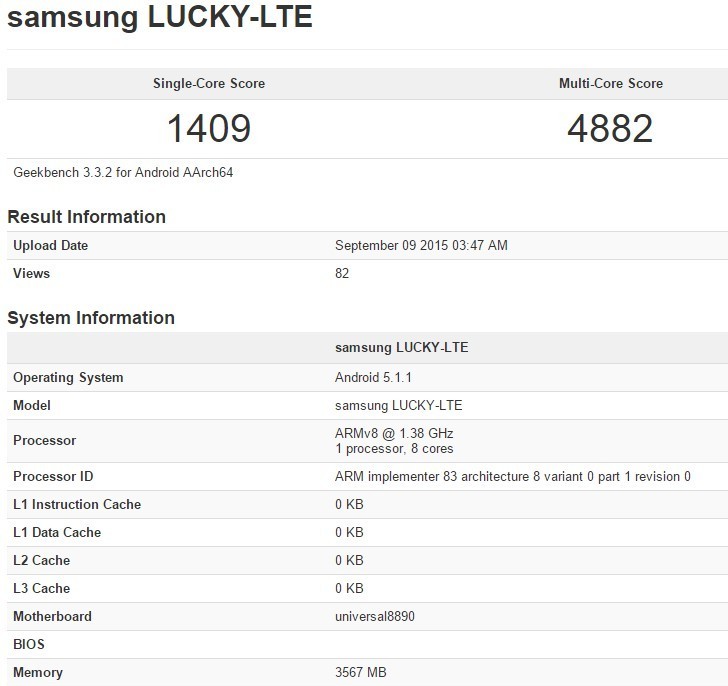 They're scoring quite high, too, though not on par with the existing 7420, which is typically around the 5200 mark in the multi-core test. The low clock rate may be key in this respect, as 1.38GHz is significantly below the rumored 2.3GHz maximum.

The tested unit packs 4GB of RAM, though if it is a flagship chip indeed, we may see it coupled with 6GB, considering the direction the industry is headed. Another interesting point is that the chip is implemented inside a device, codenamed LUCKY-LTE. You could speculate that it goes to indicate Samsung finally adopting its own modem, instead of using a Qualcomm solution.

these benchmarks is for mid-range exynos chipset which will compete against SD620. While, high-end exynos in galaxy S7 processor benchmarks ( the real exynos 8890) single core score: 2348 multi-core score: 8137

LMAO, this isnt the new flaship SOC, its a mid ranged chip. The new Exnos M! that will be in the S7 has alread been benchmarked longside the A9 and A9x months ago on geekbench, and it beats all in both single core and multicore except the new denver ...

If they'd want to focus on energy efficiency and reduce heat emission, they would only try to increase its clock very minutely, say around 1.5~1.8GHz, some notches below the 2GHz mark. With that much already desirable core score for a low clockspeed,...