A Xiaomi laptop might finally become reality next April 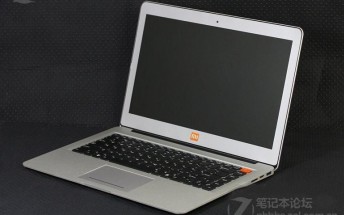 Rumors of a Xiaomi laptop have been around since 2014, but the company is yet to put out or even hint at the possibility of a notebook offer. However, these rumors have been rekindled by industry sources and with additional info on the matter, the Xiaomi PC appears closer than ever.

The new batch or rumors claim that Xiaomi has been working hard at crafting a laptop within its own dedicated PC department. The Lei Feng Network officially revealed the existence of said company branch, meaning that if a laptop does become reality, it will most-likely be a true Xiaomi product, as opposed to an outsourced or rebranded device.

The PC itself is said to have an Apple MacBook-like design, which is all but expected, considering Xiaomi's track-record. Still the alleged specs sheet sounds impressive and is usual for Xiaomi the price tag is way lower than you'd expect.

The suggested screen size is a standard 15.6 inches with a resolution of 1920 x 1080 pixels and an LED panel. A powerful 4th generation Intel Core i7 processor is said to run the show, along with 8GB of RAM and allegedly an Nvidia GeForce GTX 760M discrete graphics solution with 2GB of dedicated video memory.

A Linux distribution will come standard instead of Windows, to keep costs down. That is one powerful setup that, by today's standards, can qualify as an entry-level gaming offer. These have become quite popular and promise adequate gaming performance without braking the bank, but similarly-specked machines like the Asus G551, Acer Aspire V3 or the Lenovo Y50 are all priced a tad over the $1000 mark, whereas the Xiaomi notebook will apparently retail for just 2,999 Yuan ($466).

If the Chinese OEM does manage to deliver on these promises, the Mi laptop will offer amazing value, even if it comes out in a few months. However, it is also worth noting that no official statement has been received by Xiaomi yet and there are other rumors of a possible 12.5 inch or 13.3 inch form factor flying around, so the quoted price might apply to a lower spec'd version.

I think this notebook will use Deepin OS.. but i don't know the version..

could you please tell me the release date of mi laptop