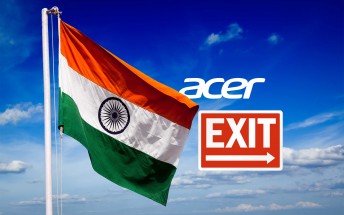 Acer has revealed its plans to stop selling smartphones in India. The company will focus on its hardware and laptop businesses in the country instead.

India is the fastest growing smartphone market in the world, and yet Acer has decided that for now it won't be a focus for the company. Acer India's chief revealed that government policies like Made in India have had their influence on the company's decision.

The change in government policies of Make in India and other aspects, our realisation has been that it is too much of a market which is left to the smaller brands rather than any larger brands trying to enter it at this particular stage.

Analysts aren't surprised by Acer's move considering the sales performance of its smartphones. Vivo and Huawei have taken advantage of flash sale strategies, which seem to land well with India smartphone buyers. Furthermore, the company had hardly anything compelling to offer for the budget-oriented buyer.

Still, the company will continue its operations in the Indian market. We wish Acer to find the right formula and return to India with a bang soon.

New 2020 Chromebooks get up to 8 years of updates, but not all Chromebooks

I freaking hate those flash sales. I have a Mi which I bought because of the reviews and I hated it. Now I have Xperia XZ and despite the poor reviews, it is amazing. It somehow manages better battery life on smaller battery, is snappy enough and des...

Acer never updated a single model of their phones in India and still charged a premium. People buy Sony, Samsung, HTC because they deliver updates. But if no software support, how can Acer compete against the Chinese brands?