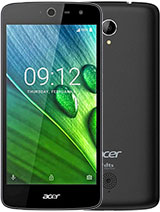 How do you can replace applications to SD card?
Acer Aid Kit→Applications→Replace
There are some complications about replacing.

It is a very good phone for the price,
Pros

Never got incompatibility with any phones.

Excellent audio (even better than many 300€ smartphones)

Only has 4GB usable (since the other 4 are for OS), using external sd card as internal memory is a bad choice for amost android devices.

If you use the smartphone many times a day you may consider getting a phone with a bigger battery, but this 2000mAh works well

Its horrible yo record videos

how come i cant connect to the 3g network here in the philippines?

Its a good phone. The only problem I got so far is with the headphones. This phone has a compatibility issue and will not work with most headphones you buy in store.

what to do?
It won't light up but it charges. the red light flashes but it won't power up.

AnonD-709687, 21 Oct 2017I love everything about my Acer T06 but it's handling of it... moreYou can move some of your apps to the SD card, which will free up space on your phone memory. I have a 32Gb SDHC, SanDisk Extreme card.

Zolpszx, 27 Nov 2017I hate dis phone cant Support nba2k14 wat da and Other game... moreMost games work fine on the phone, but the Acer Game Zone only shows the games that are compatible. The gaming feature is just a bonus to have on a cell phone, so the main purpose of course is to make phone calls and text messaging.

My 32Gb SD card works fine in my phone, maybe it is just your card that is not compatible?

I hate dis phone cant Support nba2k14 wat da and Other games so wat Is the purpose of Acergameszone?? 😒😤

what touch panel is compatible to acer liquidzest t07 model?

I bought a 32 GB SD card to add memory to my Acer Liquid Zest T06 and the phone said it was incompatible. Would an 8 or 16 GB card be compatible with the phone? or is it that the phone doesn't support SD cards?

Anonymous, 02 Nov 2017 Hold Volume Down + Power simultaneously thank you very much for the reply.

but does it work as for factory reset?

Gokai Pink, 10 Aug 2017is this device has a screen shot features? how does it w... more Hold Volume Down + Power simultaneously

Hop to block a phone Number ?

AnonD-709687, 21 Oct 2017I love everything about my Acer T06 but it's handling of it... moreNice cell phone, the 8GB ROM memory is for apps that come with the phone, so it leaves you about 3.8GB phone storage memory. The 1GB RAM is only for the current apps that are in use, so this varies. The battery is not removable, except by a cell phone servicing company. The battery holds a charge very well, but you need to charge it initially for 8 hours, then just regular charging afterwards.

I love everything about my Acer T06 but it's handling of its memory.

I bought this after reading it has 8GB of memory.

But after going into the System Doctor, it says I have less than 1GB to work with. And when I install the updates (every 2-3days), it made things worse!

It's like plugging a gold-plated toilet with paper towels. Pretty to look at but soon you have to buy and use another toilet. I have to use a separate phone (Samsung) to hold my apps and my Acer T06 for phone calls.

Not cool. Any ideas?

do model to6 suport 4g

Anonymous, 06 Aug 2017I've had this phone since March 2017 and now for the past m... moreAfter restart don't start the phone right up. The apps aren't deleting themselves and reinstalling but the apps from the SD card aren't loaded. Android 6.0 loads only phone storage apps and SD apps are loaded some time after that, after the phone is booted up. To fix this just leave the phone untouched/locked for 10-15 minutes before starting ( after booting up ). That way it will have the time to load all the apps and won't have to restart thinking it booted up wrong ( detects the apps but not displaying them ). Hope this helps.