If it looks like a duck and walks like a duck, then it must be a watch. Horrible jokes aside, the Amazfit GTR simply nails the traditional round watch aesthetic. The Amazfit GTR really leaves little to be desired in the looks department, while still promising to deliver tons of practicality. 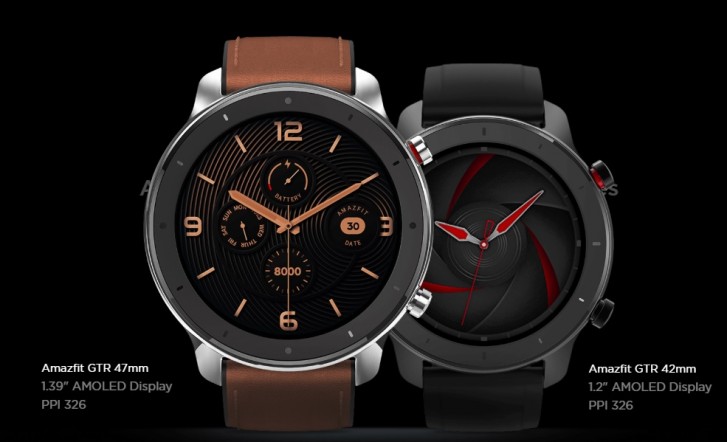 It is definitely worth noting that you are quite spoiled for choice when it comes to the GTR. It is available in both a 42mm and a 47mm variant. The former, of course, giving up half of its battery life for the compact form factor. 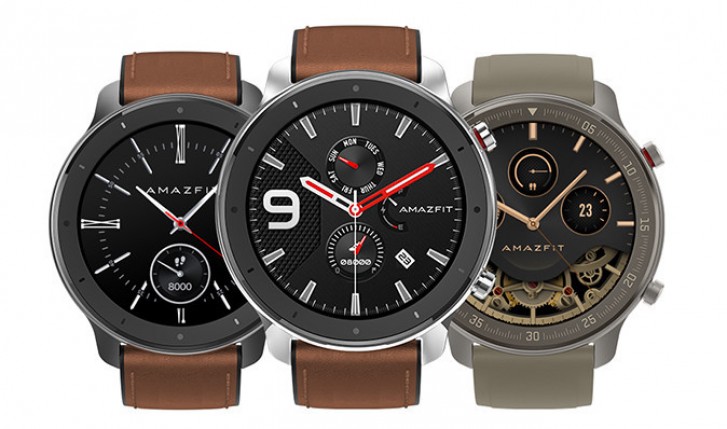 Then there is the 47mm size, which we have for review. To be even more precise, though, we have the Aluminum variant, weighing in at just 36 grams. You can also pick the GTR up with a titanium enclosure at 40 grams and a stainless steel one at 48 grams. The latter two are significantly less common and a bit harder to come by. Besides the material, finish, and weight differences, all three variants are identical in features and specs. You do, potentially get a different strap out of the box, but since it is a standard 22mm watch band (20mm on the 42mm model) you can pick a third-party replacement anyway. 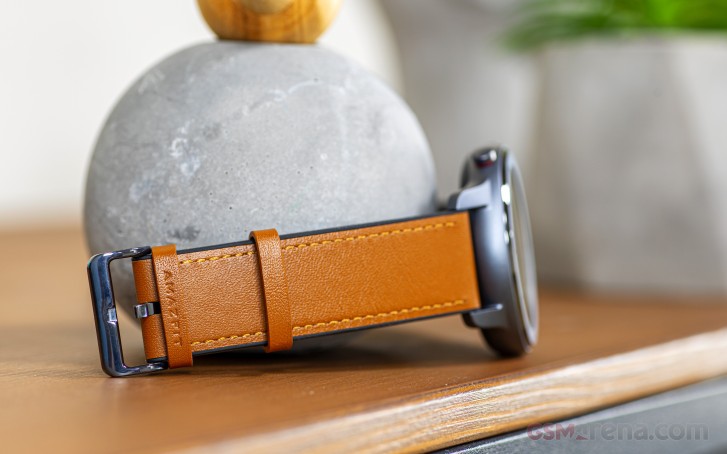 We were never really tempted to, though, since the included strap feels and looks amazing. Despite being described as leather on the official site, it is comprised of very soft plastic and feels sturdy yet very comfortable. It even has a pattern on the bottom side, which helps with band sweating quite a bit.

The leather part of the strap is actually just the its top surface and a bit extending to the bottom side. The two materials are combined really seamlessly and make for a great combination of comfort and style.

The only real complaint we have about the strap concerns the two safety rings meant to hold the loop in place. These don't really feel as premium as the rest of the strap. Even so, Amazfit etched a small logo in one of them, which is really indicative of the attention to detail that went into the product as a whole. 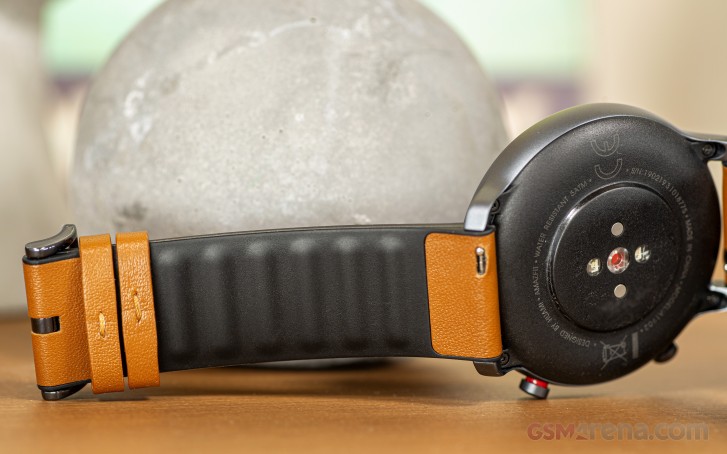 Our 36-gram aluminum Amazfit GTR feels really light on the wrist. That's just four, or so, grams more than the Amazfit Bip, which is entirely made of plastic. Pretty impressive, if you prefer your wearables light. The benefits being mostly to comfort during prolonged wear and especially while sleeping with the device on. At just 10.75 mm thick, the Amazfit GTR was low-profile enough to wear to bed. Something we found to be a struggle with the Samsung Gear S3 and its massive 13mm thick, 63-gram body and rigid rubber strap.

Of course, this is yet another subjective point, and it is worth noting that if you are a long-time watch wearer and are used to a bit more heft on the wrist, the Amazfit GTR might feel a bit too light for your taste. Even the stainless steel 48-gram variant is a bit too light in average watch terms. 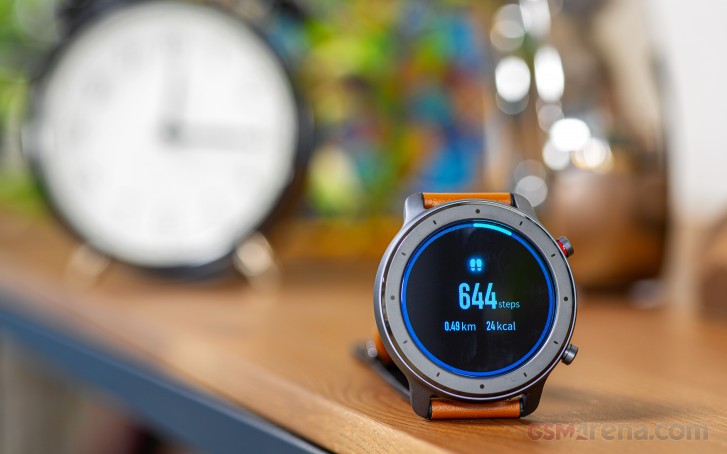 The styling on the body of the watch is yet another subjective matter. We definitely fancy the all-black aesthetic. However we aren't exactly confident in the scratch-resistance of the paint job. Our unit actually came with a few imperfections out of the box, and introducing new ones was pretty easy.

The finish on the dial, especially, tends to pick up grease and moisture in such a way that it stains in a pretty visible way, making for a worn-out look. Unfortunately, we can't really comment on the either the stainless steel or titanium variants, but our research does lead us to believe that any of those would be a better bet than the aluminum if you want to keep your watch looking fresh long-term.

The amount of hardware crammed into a modern smart wearable is pretty impressive. That, of course, is especially true for proper smart watches. Still, even something like the Amazfit GTR is an amazingly tech-dense gadget. 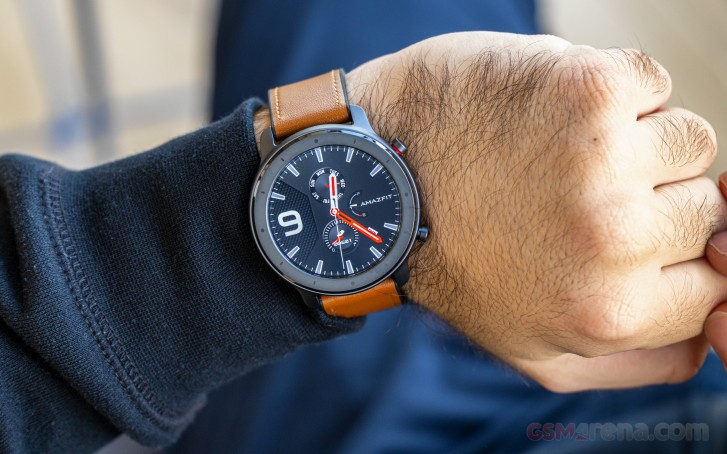 Working our way from the outside in, what is probably the centerpiece of the experience as a whole is the vibrant and very sharp OLED panel. In what is a relatively cheaper option, compared to the closest available competitors, one would naturally assume that the display would be the first to take a hit. On the contrary, with a resolution of 454 x 454 pixels, the 47mm Amazfit GTR is up there with the new Huawei Watch GT 2 as one of the most pixel-dense panels you can have on your wrist. 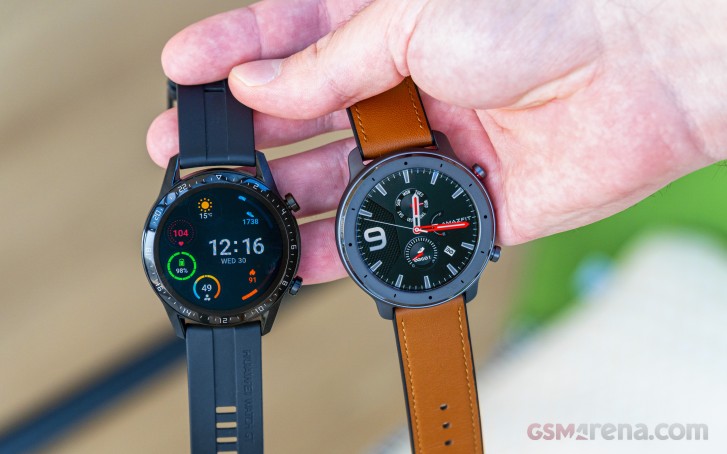 As is typical of OLED technology, colors are vibrant. Blacks are inky deep. Brightness is also plenty. Glare off of the Corning Gorilla 3 coating is a bit more than we would have preferred, though, which is especially noticeable in direct sunlight. Even so, the Amazfit GTR remains perfectly usable outside and just about on par with competitors. Thanks to a built-in luminance sensor, the GTR also reacts quite effectively to changes in outside brightness conditions. 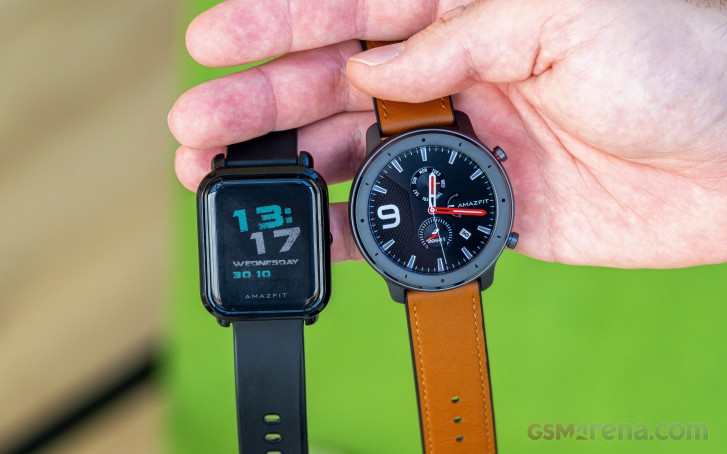 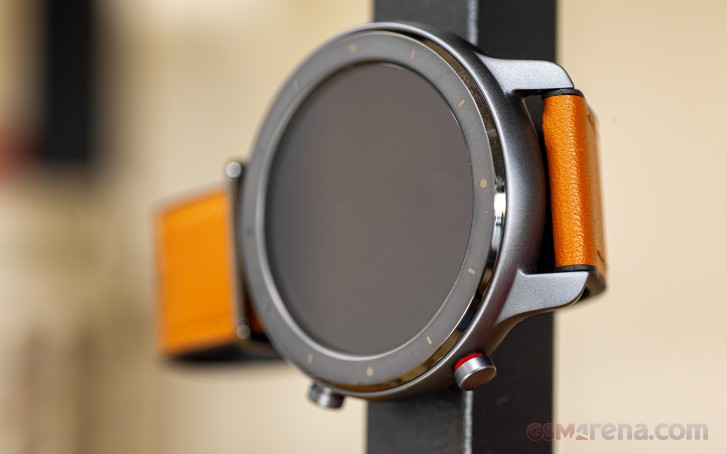 In terms of controls, the Amazfit GTR has two physical buttons beside the multi-touch display. These look quite nice and complement the overall design of the wearable. The red accent on the top one is a nifty little accent we appreciate. However, the buttons feel a bit mushy and are rather hard to properly press. Plus, since the top one is strictly a home/screen on and off button and does nothing else within the actual UI, it seems suboptimally utilized. 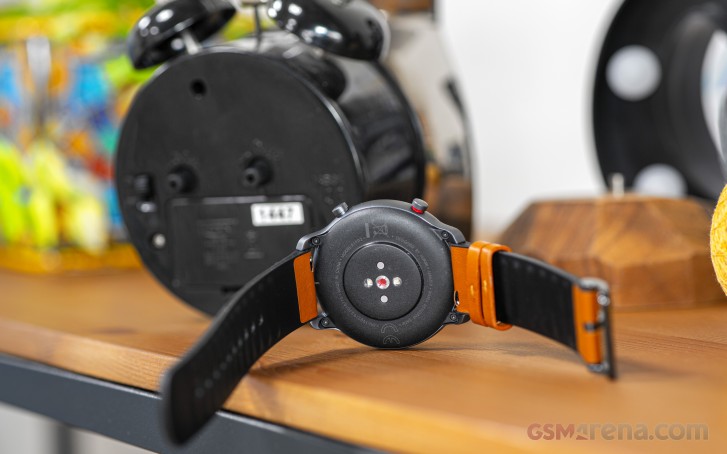 The backside of the Amazfit GTR is made entirely of plastic, which feels sturdy enough and keeps the weight down. It has four clearly visible and easily accessible screws in each corner. Technically, taking the wearable apart should be quite easy. You might not want to do that unless really necessary, though, since you could easily damage some sealing elements that help deliver the impressive 5 ATM water resistance rating.

Charging is done through two pogo pins on the back of the wearable, which, to be frank, is far from an ideal setup. The idea is to plop the GTR on what is an irritatingly small charging base and have magnets provide an extra bit of guidance. When you get it just right, it does, indeed, charge perfectly fine, but it is really easy to misalign the two pieces and interrupt the charging process. Huami could have done a better job designing this bit.

Besides the rather simple pogo pins for charging, the back only houses the PPG biological tracking optical sensor. Amazfit uses the BioTracker marketing name for this. And while it is a bit more sophisticated than your run of the mill PPG sensor, it is still the familiar light-based affair that can't really compare to a proper ECG reading.

The clever software allows the Amazfit GTR to offer advanced full-scale heart rate monitoring, with max and min bounds and overlay that with suggested fat-burning estimates. And if your exercise gets too intense and your heart rate spikes, the GTR will warn you. Not quite comparable to what Apple is doing with the Watch and ECG, but still a cut above your generic activity tracker. 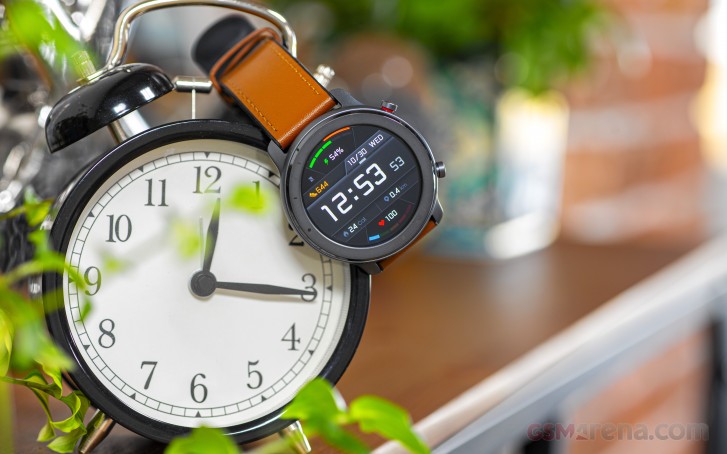 Moving on the Amazfit GTR internals, information gets kind of scarce. We know, for certain, that there is a 410mAh LiPo battery in the bigger 47mm model and an 195mAh one in its smaller sibling. We also know that whatever chipset is driving the GTR, it has BT5.0 BLE and GPS + Glonass. Things get a bit speculative beyond this point, but form what we can gather, the OS has about 16MB of RAM to work with and 64MB of storage. It stores the OS and various other resources. Most notably - watch faces.

Taking all of this into account, plus the fact that the OS itself kind of chugs on certain animations and is far from speedy, it is fairly safe to assume that the internals on the GTR are pretty underpowered.

Huami has likely re-purposed a lot of the tech it already has for driving things like the Bip and the Mi Band with all the resource limitations that come with it. Some of the upsides of this include lower production costs and potentially lower power consumption. Plus, the fluidity situation really isn't all that bad on the custom OS.

We are pretty willing to forgive the lack of raw performance and slightly lower animation frame counts if that resulted in better battery endurance and lower retail price. Which, we hope it did. We just wish Huami had thrown in a bit more memory on the GTR, since just like the Bip, it can't keep its entire watch face selection on-device. These need to be swapped-out as needed via the app. On the plus side, this is one of the reasons why such a vibrant third-party wealth of unofficial watch faces exist for these sort of Amazfit devices. Once somebody figured out the Bluetooth communication and file structures, modifying certain aspects of the otherwise closed-up experience became pretty trivial. More on that in the software section.

Amazing watch for every moment. Great display, nice colours, heart rate mesure very well and the design is excellent with nice feeling in your wrist!!! Even in your sleep does not bother at all. Great watch!!!!!!!

GPS function is too poor, rarely gets GPS signal. When it works, it's imprecise and loses the signal soon.