Analysts: Galaxy A51 was the best-selling Android in Q1, Galaxy S20+ only flagship in the Top 6

Four out of the six best-selling Android phones during the first quarter of this year were made by Samsung, shows data by Strategy Analytics. The other two were Xiaomi phones.

The Samsung Galaxy A51 (the 4G version) was on top with a comfortable lead – with 6 million units shipped, it made up 2.3% of all Androids sold globally during Q1. The A51 is popular around the world, but especially in Europe and Asia.

Its closest rival is another affordable model – the Redmi 8 from Xiaomi, which made up 1.9% of the market. It has many fans in India and China and is becoming increasingly popular in Europe as well. SA explains that money worries during the pandemic combined with reduced subsidies from carriers have led people to seek out more affordable devices. 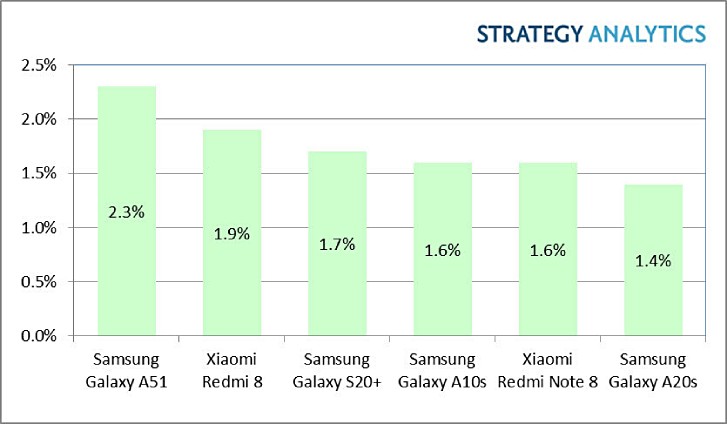 In fact, the only premium model in the Top 6 is the Samsung Galaxy S20+, sitting in third with a 1.7% share. The S20 Ultra, which was selling better than expected, is not on the list and neither is the smaller (and cheaper) S20, even though it’s very close to the S20+ in terms of hardware.

The Galaxy A10s and Galaxy A20s are part of Samsung’s efforts to strengthen its entry-level offerings and it worked, these two were some of the most popular phones around the world. The Redmi Note 8 is Xiaomi’s second phone to make it on the list, a more premium offering than its sibling at a reasonable price.

Canalys: Demand for new phones has been crushed in Q1 2020

What exactly do you not trust about the Chinese? Seems you have been drinking the American cool aid for far too long..

I always buy Samsung Phones for me and my family too, I know Samsung has global standards of testing procedures which Chinese companies do not follow . A51 and S20 are really good phones

Yup! And also wider availability and way better customer service, too. Also, Samsung's One UI is leaps and bounds better than any shitty Chinese software — except for maybe OxygenOS lol.