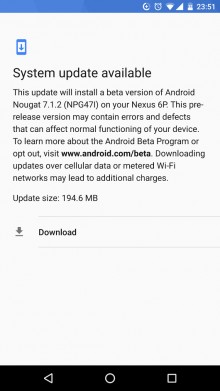 The list of supported devices hasn't changed with this release, so giving Android 7.1.2 a try before anyone else is still only possible if you have a Google Pixel, Pixel XL, or Pixel C, Huawei Nexus 6P, LG Nexus 5X, or Asus Nexus Player. For all of those products the build number for the new software is NPG47I.

With Android Nougat Google has moved into a quarterly release cycle for new incremental versions, though it is unlikely that the final 7.1.2 build will actually roll out before March (and thus Q1) is over. We assume this might become public alongside next month's security patches on April 3.

Obviously that's only true for the devices Google still supports. If you have a handset that isn't a Nexus or Pixel, many months will pass before you see any trace of Android 7.1.2 on it. That however might not be such a huge loss, since this iteration of the OS is basically all about bug fixes and small enhancements here and there. It has no big new features or anything like that.

brap is a sign of happiness, notification for the beta just came up on me 6P so I guess you could say its also because of the notification scroll on fingerprint scanner