Android P rollout for Nokia phones may start in August

So far, HMD has confirmed multiple times that all its Nokia branded smartphones will get the Android P update. In fact, the company recently launched a Beta program in China for the owners of Nokia 6.1, Nokia 7, Nokia 7 plus and Nokia 8 Sirocco.

However, there has been no information on the availability of the update. Well, that changes now, as users are being told the roll out will begin anytime after July. 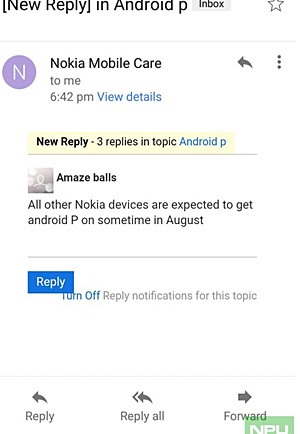 As you can see, the information comes courtesy of Nokia Mobile Care. In an email sent out to a user, the support staff gave August as the time frame when Android P will start rolling out to Nokia smartphones.

Agreed, specific time lines for individual models are still not known, and support reps are ill-informed many times, so yeah, many things are still up in the air. But it's good there's at least some information available related to Android P availability.

HMD working on Nokia 9 with under display fingerprint reader

HMD confirms July 2 launch for Nokia 3.1 in US

Mine is unlocked SIM free. Do you know differently about the problems with the update to Oreo in UK ?