Samsung has started pushing out a new Nougat beta update to eligible Galaxy S7 and S7 edge units, making it the third build that the South Korean company has rolled out as part of the beta program. 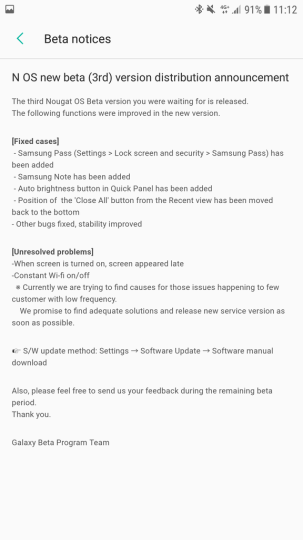 Weighing in at around 530MB, the update brings along Android security patch for the month of December. Several other changes are included as well, including addition of Samsung Pass and the Samsung Note app, as well as an auto brightness button in Quick Panel.

The position of the Close All button has also been changed. Aside from this, the update also features some stability-related improvements and regular bug fixes. Some problems are yet to be fixed, including one where-in screen appears late on being turned on - Samsung says the fixes will be included in upcoming updates.

when nougat software update 7.0.1 will get updted for j7 prime. It is shame on samsung. Other phones have already updated nougat version.

These comments... Y'all're the worst. Just got the update today, and it's great. The thing y'all need to understand about the Samsung Nougat update is that it does way more stuff than regular Nougat, and also adds in the UX and non-stylus aspects o...