September has passed and AnTuTu is out with its monthly report on the top 10 best-performing Android smartphones and there's a bit of a movement compared to the August ranking. Now Asus' ROG Phone takes the first place mostly due to its overclocked CPU on the Snapdragon 845 platform. Instead of running the four big cores at 2.8 GHz, the ROG Phone's clock speeds go up to 2.96 GHz.

The second place is taken by August's leader, Xiaomi Black Shark and it's closely followed by the OnePlus 6 taking the third position probably thanks to its nearly stock Android experience and software optimization. 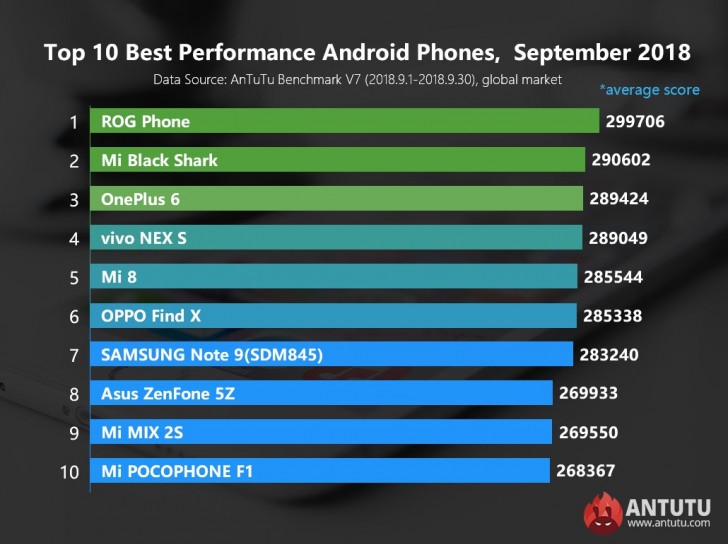 Unsurprisingly, the chart is dominated by Snapdragon 845-powered smartphones but things might change after this month as Huawei's Kirin 980 SoC has all that it takes to disrupt the market powering up the company's Mate 20, Mate 20 Pro, Mate 20 X and Mate 20 RS Porsche Design.

Keep in mind, the ranking consists of phones that have at least 1,000 units running the benchmark and scores are averaged across all handsets running the latest V7 version of the software. Additionally, the previous ranking included smartphones only from the Chinese market while this one extends to the global one.

making your own decisions doesn't make you smart, But repeating others point of view without thinking for yourself does make you a sheep.

ah so it's region based. can't choose then :) thanks for the info