After posting a solid score on Geekbench, the HTC U 11 now went through AnTuTu, which glimpsed the specs of the soon to be unveiled flagship.

A Snapdragon 835 chipset will be paired with 4GB of RAM and will run Android 7.1.1. The Sense-ified interface will be rendered on a sharp 5.5” QHD screen. The particular model to go through the test had 64GB storage, but it's unclear if there will be any other options.

The camera department on the U 11 will offer a 12MP main shooter and a 16MP selfie snapper. Specs read from an alleged retail box fill in more blanks - IP57 waterproofing, HTC BoomSound, a fingerprint reader and QuickCharge 3.0. 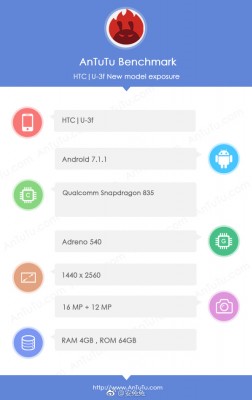 Of course, none of these will be the headlining feature of the HTC U 11. Instead, side-mounted pressure sensors will read your grip, a fairly unique control scheme.

"I prefer the ability to shoot photos in the evening," read naughty in my head... Moving onto a different note. I'll take the "UltraPixel selfie cameras" with a handful of dead sea salt just as I would with these other two mix-ups: http://www....

2k is good already for such a small display

Like we couldn't make an educated guess about it having the 835 chip, with 4 gB ram and 64gb internal. The big question is about it's bezels and capacity to take night selfies like a champ. This is what 2017 flagships are distinguished from 2016 flag...